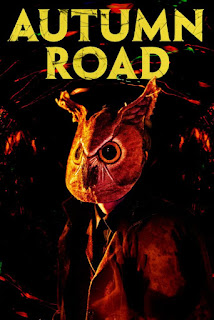 Twin brothers running a haunted house and an aspiring actress are all affected by the disappearance of a young girl.

Directed and written by: Riley Cusick

“Autumn Road” is another place where nothing good is going to happen. This story starts on one of the best times of year, Halloween, but isn’t going to end so joyously. Winnie (Maddy-Lea Hendrix) has just come from doing some trick-or-treating, and wants to share some of her candy with her friend Charlie (Riley Cusick). The two are sitting in a hearse outside of Charlie’s family haunted house. Just after the two share a touching moment, she has an allergic reaction and chokes as Charlie panics. This leaves big brother Vincent (Riley Cusick) to clean up the mess instead of coming to the rescue.

Years later the brothers find themselves in the same place still running their haunted house. Not doing much better is Winnie’s older sister Laura (Lorelei Linklater), who has returned home after some struggles of her own. She meets back up with the brothers to do some catching up. However, it’s not a great time because Vincent is having some anger issues, and her inquires into Charlie’s relationship with Winnie aren’t going to help.

Before getting to the horror in this story, lets be clear this is very much a sad story. Winnie and Charlie had such a moment going for them when things unexpectedly go wrong. Winnie lost her life, and Charlie ends up stuck in a life next to his brother who has some issues. The more time Laura spends with them the more depressing her sister’s death becomes. Where all these characters end up isn't going to help brighten things up either.

With so much sadness in the story it would have been nice to have a little more horror. Much of the horror is obviously going to come from the bad brother Vincent. It almost seems a little random, but he decides to solve his anger issues by trying to be a serial killer. However he proves not to be the best of serial killer around, but does have a pretty cool mask. The haunted house provides a good background, but it’s never used to conjure up any real good scares. Speaking of good scares, there’s one particular moment that might be shocking more than scary but it does come out of nowhere and will have your attention.

In the end, this is just a really sad story for all those who are involved. When Winnie dies she’s not the only one to loss a soul. Charlie, Vincent, and Laura also loss a soul that night, and clearly never recover. The film does well at bringing this out, and painting a depressing picture for those characters. The horror in the story is alright, but the audience will probably feel more depressed than scared. With that, I give it 2 pools of blood.