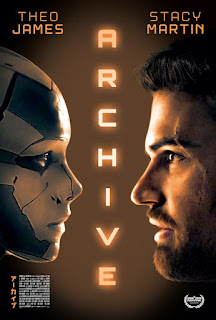 2038: George Almore is working on a true human-equivalent AI. His latest prototype is ready. This sensitive phase is also the riskiest. Especially as he has a goal that must be hidden at all costs: being reunited with his dead wife.

Directed and written by: Gavin Rothery

As society moves more into the future, technology continues to play a bigger role in our lives. One of the biggest things guiding us today are apps. It won’t be long before we move more to robots, which some basic forms already exist. Fast forward to 2038 in “Archive,” and a much more futuristic world with far advanced technology. Apps are definitely a thing of the past, as George Almore (Theo James) is already working on his third robot.
The movie opens with an awesome looking base on the side of a mountain with a waterfall. It seems like it’s in the middle of nowhere, which might mean George is working on some top secret stuff. While his big project is hidden early on, the audience is introduced to the first two robots he’s built J-1 and J-2. J-1 is very basic, but can complete some tasks, while J-2 is more like his right hand robot. What’s different about J-2 is it seems to have a level of emotion to it, and maybe some memories.
Speaking of memories, they play a pretty big role in what’s happening. George has memories of his wife over the course of the movie. Some good, some bad, and some which apparently show what happened to the couple. The big project he’s working on is J-3, which is a robot that very closely mimics a human. Like the base, J-3 has a fantastic futuristic look after getting over its freaky first appearance. And the memories, well they are supposed to be put into J-3.
And how are memories going to end up in J-3? That’s where the Archive machine comes into play, as it’s a little unclear how it truly works. It somehow has some of a person’s thoughts saved for a time period after they are dead. Sounds crazy, but remember this is the future. George really isn’t supposed to be doing that, but it’s obvious he’s hurt by the loss of his wife, and wants her back any way he can take her. Of course messing with technology he isn’t supposed to is going to come with consequences, as the audience sees in the final stretch of the movie.
This movie moves in stages, and introduces fancy technology all with the purpose of hiding something. It’s easy to get wrapped up in watching George interact with the robots in the beginning, and even focus on what J-2 is up to. Then there’s the random appearance by a few other characters that brings signs of danger that never really happens. All mixed in with memories showing George’s desire to be reunited with his wife at all costs. Ultimately, “Archive” tries to get the audience looking at everything else besides the twist that’s ready to punch them in the gut if they don’t see it coming. Nope, I was a sleep at the wheel and definitely got punched in the gut. Because it got me, I have to give it some credit and 3 pools of blood.
HorrO

More information about the film at: http://promotehorror.com/2020/06/21/official-trailer-and-poster-for-archive/
Posted by HorrO at 8:31 PM