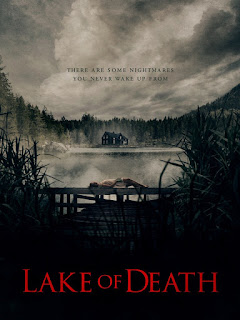 Lillan and some friends travel back to the remote cabin by the little lake, where her twin brother died last year, and soon after arriving strange things starts happening. Inspired by the 1958 classic horror film.

Got to like a title such as “Lake of Death!” Forget the typical cabin in the woods description, or the even shorter “In the woods” or “The Forest.” It definitely says watch me now, and for those headed to the lake… “stay away!” Unfortunately for this cast of characters, they can’t stay away from giving the lake a chance to live up to it’s name!
So lets start with this cast of characters the most important being Lillian (Iben Akerlie). She has a past with the lake, and is the big reason they’ve returned. There’s Bernhard (Jakob Schoyen Andersen) who’s a podcaster interested in the tales about the lake, and Lillian’s gal pal Sonja (Sophia Lie) and her boyfriend Harold (Elias Munk). There’s opportunity for some male drama with Lillian’s ex Gabriel (Johnathan Harboe) coming along, and a local guy friend Kai (Ulric von der Esch) who also seems to have interest in her. Seems like a good group to stir up some trouble, and scare the hell out of.
Again, it all starts with Lillian, and her brother Bjorn (Patrick Walshe McBride). Absent from the cast of characters above, Bjorn disappeared the year before at the lake. No one is sure what happened to him, but Lillian obviously has some strong feelings about being back there without him. There’s more going on with her including sleep walking and day dreaming, which sets up a lot of the horror in the movie. Strange things occur while she sleep walks at night that no one can explain, and she constantly sees this black liquid in different places.
Those things definitely make this story creepy, along with similarities to other movies like the “Evil Dead” when the group discovers a hidden basement. Bernhard finds a book with a lot of darkness in it. No, it’s not going to bring demons to the cabin, but is an important clue to what’s going on. While they do try to throw the audience off track, it might not be that big of a surprise to what’s happening here. The bigger surprise might be the events that all made this happen.
“Lake of Death” is inspired by a 1958 film, which I can’t say I’m familiar with so I’m not sure how much it follows that film. However, it’s clear that it also has influences from several modern horror movies as well. It sets up a group of characters ready to ignore the strange events that occur until it’s too late. Lillian drives the horror with her behavior, and visions. They make the most out of the setting with some fantastic shots, which makes it hard to believe this is the “Lake of Death.” It does get creepy, but doesn’t go big on the death scenes instead leaving the last twist of the story to shock the audience. With that, I give it 2 pools of blood.
HorrO

More info about this film at: http://promotehorror.com/2020/07/14/new-trailers-for-random-acts-of-violence-lake-of-death-and-impetigore/
Posted by HorrO at 4:22 PM