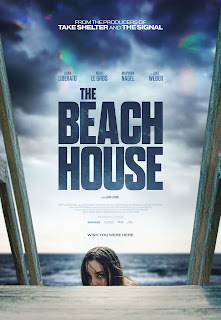 A romantic getaway for two troubled college sweethearts turns into a struggle for survival when unexpected guests - and the surrounding environment - exhibit signs of a mysterious infection.

Directed and written by: Jeffrey A. Brown

Whether in real life or horror movies, it’s probably never a good idea to stay in an empty town. It might seem nice to have everything to yourself especially if you’re trying to rekindle some flames. However, sometimes things seem to be too good to be true, and this situation is one of them. In "The Beach House," the town is empty for a reason, and the few that come for a visit are in for a surprise.
Emily (Liana Liberato) and Randall (Noah Le Gros) arrive at his father’s vacation house to find no one in sight. Randall is convinced people will come to town soon, but in the meantime the two should use the time to reconnect. It starts off just the way they want until Emily comes downstairs to find Jane (Maryann Nagel) sitting quietly at the kitchen table. Soon enough, she also gets to meet Jane’s husband Mitch (Jake Weber). The couple are friends of Randall’s father, and have apparently made themselves at home.
Emily, Randall, nor the audience get to know a whole lot about this couple, which works out well. Actually, keeping the story at four people, and giving just enough information about them works well in the strange events that begin to unfold. The most important thing to know about any of them is that Emily is about to finish her degree in Organic Chemistry and now take a dive into Astrobiology. The audience can take that as one of the few clues to what’s happening here along with the appearance of creatures like worms, and eating oysters for dinner.
Yes, dinner where all the fun begins because Randall tries to get the couple to smoke his special stash with him. Things get odd outside, smoke rolls in, and people begin to feel weird. Is it the drugs or something else? A good question that takes some time to answer because things continue to be strange the next day with Mitch missing, Jane acting even weirder, and Randall not feeling great. Randall and Emily go to look for Mitch on the beach, and end up laying down for awhile. Randall still isn’t feeling great and has to return to the house, while Emily is about to experience quite a shock.
The movie has been well paced to this point, and picks up at just the right speed down the stretch. A disgusting foot scene turns things gooey, wet, and sticky, while still maintaining its level of creepiness and strangeness. Things begin to change again going into the evening darkness with the fog rolling in once again. Unfortunately, Emily and Randall are about to find out why this town was empty when they got there.
“The Fog,” “The Thing,” a number of Lovecraft themed movies, any combination of them clearly can be found in “The Beach House." It also has a theme of eco-horror, which can found in another horror film set in the ocean “Sea Fever.” Regardless of where the idea came from, the movie has plenty going for it. It takes a beautiful setting, and creates an atmosphere that’s full of mystery, completely bizarre, and has an aura of impending doom over it. It’s perfectly paced, lays out just the right amount of clues,  and finishes things off with some great special effects to disgust the audience. With that, I’ll pass on the vacation to the beach house, and give this movie 3.5 pools of blood.

More information about the film at: http://promotehorror.com/2020/06/19/coming-to-amcs-shudder-july-9-acclaimed-contagion-sci-fi-horror-the-beach-house/
Posted by HorrO at 11:03 AM