WE ARE THE MISSING REVIEW 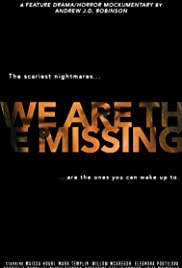 The scariest nightmare are the ones you can wake up to in “We Are The Missing”; a drama/horror pseudo-documentary following The Madisons’ desperate search for their missing daughter.

There’s shows like Dateline, and 20/20 that have been covering all kinds of murders, crimes, and disappearances for years now. Those kind of crime related programs have picked up recently with shows all over cable tv. Hell there’s even tons of true crime podcasts now with some actually helping solve the crimes. So why not have a little fun with that kind of production, and make a horror movie out of it? Well, that’s exactly what “We Are The Missing” has done!
It starts off very seriously with Angie Madison (Maissa Houri) and John Madison (Mark Templin) talking about the disappearance of their daughter Riley. Each of them in their own locations, it goes back and forth with them telling a little about their daughter, and what was happening around the time of her disappearance. They’re very serious to start, and the audience might immediately fell sorry for them. Then there’s the mention of Riley’s imaginary, which changes the tone of things.
Along with the imaginary friend, there’s also the introduction of a real friend, Mackenzie. They were best friends who had an interest in horror movies. The documentary also talks a little with her, and how she’s trying to help find Riley through Facebook, and later getting involved in a local legend like Big Foot. Early on, it seems the film as a good formula of pretending to be a serious documentary, and then brings up something almost ridiculous to explain things.
Then the film decides to take a dive, and turn this into one very strange documentary. From what originally was the disappearance of Riley, is now the disappearance of Riley and her parents. This leaves the documentary talking to her sister Paige, who didn’t want to be involved. It only gets worse as Mackenzie goes missing as well, shifting the documentary to follow her sister April. It’s not over there because the documentary soon moves from strange to truly bizarre. The people behind the documentary got more than they bargained for, but hang in there to try and put all the pieces together.
Documentary or mockumentary, “We Are The Missing” will definitely have the audience going back and forth. Early on it definitely seems like the average as seen on tv missing persons story, but then reveals a formula of realness and almost ridiculousness. It plays on disappearances involving social media, local legends, and more. Then with no fear it pushes the boundaries with multiple disappearances, and bizarre reasoning behind it all. It may seem a little long at points and a bite complicated, but the pieces of the puzzle are all there in the end. It seems like a great timing for a film like this to come along and have a little fun with all these crime shows. They definitely took a risk here, but I think it pays off for them so I give it 3 pools of blood and hope not to disappear!