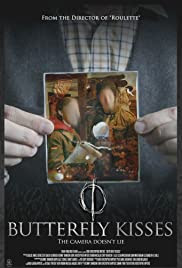 A filmmaker discovers a box of video tapes depicting two students’ disturbing film project featuring a local horror legend, The Peeping Tom. As he sets out to prove this story is real and release it as a work of his own, he loses himself and the film crew following him into his project.

Don't blink or you just might miss your opportunity for some “Butterfly Kisses.” Sophia (Rachel Armiger) and Feldman (Reed DeLisle) are two student filmmakers who tried to make a film about the local legend of the Peeping Tom. These filmmakers seemed to go too far in their search for the truth, as the legend got closer and closer to them. Of course they documented everything on video tapes, which have now been found by another filmmaker, Gavin York (Seth Adam Kallick).

Gavin has looked through the students’ work, and decided he wants to finish what they started. As he pieces together their film, he becomes increasingly convinced that what the students found is real. While the students documented their own work, Gavin has a film crew documenting his work, and ability to sell the film. He risks everything from his family’s future to even his own life to make others see his vision with the film, but by the time the truth comes out it might be too late.

Now this is an interesting film on multiple layers. For one, it’s a found footage film on top of another. At times the audience sees Sophia and Feldman working on their film. Sometimes they’re together, and sometimes they’re filming themselves individually. The audience is also primarily watching Gavin be documented as he finishes their film. As he struggles to convince others that what happened to the students was real, the film even goes one step further trying to create some commentary on found footage films. They manage to have an interview with a director of one of the most popular found footage movies. And if that’s not enough, the writer/director of “Butterfly Kisses,” Erik Kristopher Myers, is the one documenting Gavin in the movie.

While the film spends a lot of time covering Gavin’s journey, it does mange to create a pretty creepy urban legend. The Peeping Tom supposedly can only be summoned at the end of a tunnel after starring down it for an hour without blinking. That seems almost impossible, but Feldman manages to capture him on video. The Peeping Tom then comes closer and closer to whoever sees him when they blink until he can give them a butterfly kiss. What is a butterfly kiss…victims aren't going to want to know! The audience will have to wait for it, but there will be a few scares before this one ends.

As with many found footage films, it’s about staying as real as possible until it reveals whatever the mystery is, and this film does that pretty well. A lot of focus is on Gavin finishing the film, and trying to find someone to believe in the students’ story. From the students’ angle, the audience does see the Peeping Tom, but since it’s captured on tape it gives it a different feel then say a ghost haunting them in person. A lot of the arguing is over if their tapes are even real. It isn’t until the final act that things go terribly wrong for some characters, but it still manages to maintain some realism to it. They do add one additional moment in the final seconds that does pull it further out of that realism.

“Butterfly Kisses” works because it explores found footage from different angles. The audience gets to see basically two found footage films in one, the students’ story and Gavin’s story. It then isn’t afraid to even question doing a found footage film in the first place. It isn’t about shaky camera work, and a supernatural presence haunting them at every turn. Instead it’s about a local legend that in a weird way the students capture, and can’t get rid of. It’s creepy, memorable, and definitely provides at least one great jump scare moment. Not to take anything away from the film, but the true horror fan in me wanted to see the Peeping Tom traumatize more people! Besides that, I was certainly drawn in to everyone’s story here, and thought this was well done all around. With that, I give it 3 pools of blood, and am glad that I blink a lot!