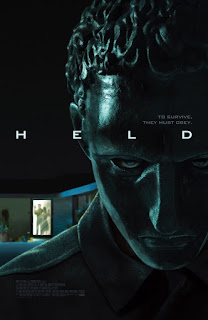 A couple’s ailing marriage is put to the test when they are held hostage in an isolated vacation rental by an unseen Voice that commands their every move.

A marriage might not last long if you feel like you’re being “Held” captive in it. Emma (Jill Awbrey) has just arrived at a vacation rental home. She gets settled in and enjoys a glass of wine by herself. She thought she would get some time alone, but her husband, Henry (Bart Johnson), arrives a little earlier than expected to join her. The two get in some time together before hitting the bed for the night. When Emma wakes up, she’s convinced that someone was in the room with them overnight.

Henry isn’t so sure of this, but that quickly changes. When they figure something might not be right, they try to escape but can’t. Henry is attacked and retreats back inside. Before they know it, the house goes into lockdown, and a Voice (Travis Cluff) takes command of the situation. He now makes the couple do what he says, or he’ll use a device to shock them. Emma and Henry’s marriage is about to face its biggest test yet! 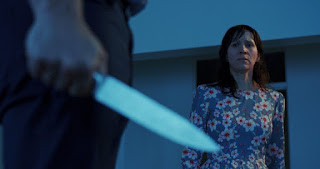 A lot of things can put a marriage to the test, and this couple certainly gets tested. Trapped in this home, they seem to have no way out, especially with the Voice able to shock them if they don’t obey. Even though the Voice does hurt them, it's also trying to help them. It teaches them what a man and woman should be doing for each other. Things like a man opening a door, and a woman cooking a nice dinner. This might not sound too exciting, but there’s a twist here that makes it much more interesting.

No spoilers here, but things will begin to get crazier. The twist will become clear with the more the audience gets to know the couple. Each of them has hurt the other in the past, and it shows why they were supposed to be there in the first place. Besides the more normal things, the Voice will make them do more drastic things. The action will pick up as they try to escape with or without their marriage intact. 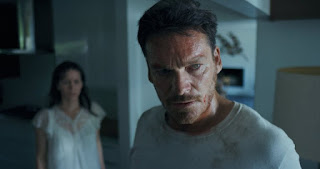 There should be no shame in trying to fix a marriage. This couple was going to give it a try, but then got some unexpected marriage counseling. Even though they were being held against their will, they were getting good advice at first. However, once sensitive issues from their past came up the situation became a lot more serious for them, and some others. The audience will get to see the Voice, and why they’re doing this to them. There will be some good action before the fate of this couple’s marriage is decided. With that, I give "Held" 3 pools of blood!