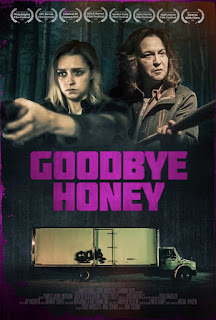 After escaping abduction, a frantic woman must coerce an exhausted truck driver to hide in the back of her truck for the night. The two women take refuge not knowing what the rest of the night has in store.

“Goodbye Honey” is about two woman who in their own ways had to say goodbye at one point, and now hope to not have to say goodbye permanently. After the death of her husband, Dawn (Pamela Jayne Morgan) has found herself continuing his trucking business. With her truck full of furniture, she has pulled over to rest for the night. While on a call with a client, she’s interrupted by Phoebe (Juliette Alice Gobin), who desperately wants to use her phone.

Dawn eventually lets Phoebe in the cabin, but the two get off to a rocky start. Dawn has lost the keys to the truck, and broke her phone in their chance encounter. Phoebe is trying to remain calm, but she continues to tell Dawn that someone is coming to get her. Dawn is having a problem trusting her, as their conversation moves from the cabin to the back of the truck. The tension between the two rises before Dawn is forced to deal with noises coming from outside the truck.

This film is full of tension from the moment these women meet until the end. A lot of it starts with Dawn and her distrust of everyone. Dawn just wants to do her deliveries, and hold onto her truck because it’s like holding onto her husband. She wants to help Phoebe, but it isn’t until Phoebe tells her full story that Dawn can let her guard down.

And what’s Phoebe’s story? Well at first the audience will also wonder if she can be trusted. Then she tells her story and the true horror of the film makes its appearance. A horrific tragedy changes several people’s lives including Phoebe. No doubt the audience will join Dawn in trusting her, but now these traumatized women will have to find a way to survive the night.

“Goodbye Honey” might not get off to a fast start, but it will leave a lasting impression by the end. Losing a husband and continuing his business is tough enough, but Phoebe’s story is on a whole new level. Once her story is shown the audience will be on the edge of their seats waiting to see her fate. The film will make the audience wait with its slow pace, and distractions before the main event takes place. Juliette and Pamela really come into their characters as this goes on. With that said, I give it 3.5 pools of blood.