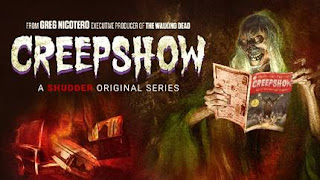 When a true crime travel vlogger documents her stay at a hokey haunted Bed and Breakfast, she gets a much scarier experience than she was expecting.

A brother and sister are running a Bed and Breakfast which they claim is haunted. It’s supposedly haunted because they insist that their grandmother killed people there long ago. They try to get people to stay there for a haunting experience, but it’s not going so well. The sister then invites a true crime vlogger to stay there, and hopefully create some buzz for the place. This seemed like a good idea until it wasn’t!

Trying to create a haunted Bed and Breakfast is definitely a great situation for a short horror film. Bring in a vlogger and that makes it familiar to the new age of social media and marketing. Now add a little drama between the owners and the vlogger and we’re moving in the right direction. Besides the great acting and costume the brother wears, the best part of the film might be the twists at the end.

An exterminator is tasked with a big job, and it’s more than he bargained for. The payout is huge, but is it worth what it’s costing him?

This exterminator seems to be good at what he does…maybe a little too good. After spraying for a customer he releases some more bugs insuring that he will be called back soon. He then goes to his next job, where he’s presented with a job that’s a little different. Yes, extermination is needed, but in a different way. He’s going to get paid more than ever, but it’s going to cost him a lot more.

Now this short film brings reminders of the famous Creepshow bug episode. This time around it centers on someone who is supposed to get rid of bugs, and will go through a wild experience of their own. The exterminator doesn’t give the audience much of a reason to like him, so they might not feel sorry for him in the end. It’s certainly a fun ending that seems like it belongs in the cartoons. This one seemed like it was casted perfectly as well!