IN THE EARTH REVIEW 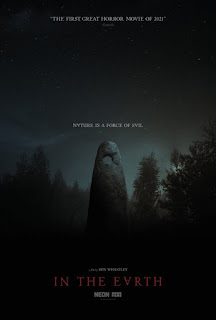 As the world searches for a cure to a disastrous virus, a scientist and park scout venture deep in the forest for a routine equipment run.

Directed and written by: Ben Wheatley

“In The Earth” presents a world that has changed a lot. A doctor named Martin (Joel Fry) has travelled a long way into the forest and stopped at a lodge. This is only his first stop, as he’s looking for another site even further away. To find it, he gets help from a park scout named Alma (Ellora Torchia). They aren’t really expecting to find many people out there, but they do find some signs that someone was out there at some point.

Before they know it they find themselves in the company of Zach (Reece Shearsmith). It seems Zach has found himself all alone in the middle of nowhere, and now very close friends with the Earth. Martin and Alma try to be nice at first, but they grow convinced that something is wrong with him. He certainly has odd habits for a man alone in the woods. They’re about to find out he has some dangerous habits as well, and

they’re about to learn more about the Earth than they bargained for.

The virus that has taken over the world sets the stage for this movie. It puts the characters in the places they are, and why they think the way they do. At first it seems like the movie might be about figuring out the virus, but it then becomes a lot more about the characters’ interactions. It gets quite bizarre, as Zach as become completely wrapped up with his beliefs about the Earth. He has some strange things in store for the pair.

Now if the audience gets lost in some of the nature, religion, and ritual talk, then they should focus on what they might have come for…the horror. There’s definitely some horrific scenes, and some that will make the audience cringe. Martin and Alma will suffer a lot in the woods. Some in the natural battle to escape, and some in the experiences they’re forced to go through.

There is no shortage of weird moments and strange talk “In the Earth.” The characters are in a different world, and looking for new answers. In the process, some seem to have lost their minds, or at least learned odd things. Reece does a fantastic job creating his own unusual character from beginning to end. There’s enough horror in the right spots to save the audience from beginning as confused as Martin and Alma. Also, there’s some great images created along the way in the dark forest. With that said, I give it 3 pools of blood!