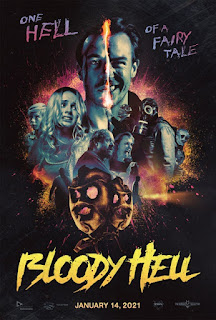 A man with a mysterious past flees the country to escape his own personal hell - only to arrive somewhere much, much worse.

When this movie ends audiences might just be saying, “'Bloody Hell' that was great!" The film follows Rex (Ben O’Toole), as he’s at a bank waiting in line to visit with a certain teller. It’s his turn and he begins to flirt with her when all of the sudden a group of bank robbers storm the bank. Down against a table, a woman’s bag with a gun in it ends up in his hands, and now he must decide what to do with it. Before the audience finds out what he does, the story moves ahead to him being put in jail for several years.

While the audience waits to find out more about that side of his story, it now follows him in his release from jail. He wants a new start at life, and decides to head to Finland to do that. As he waits for his flight, he has an awkward exchange with some guy about two older people who seem to be watching him. After a couple of more strange moments, he's finally on his way, and gets to his new country. Unfortunately a taxi ride away from the airport has gone wrong, and he ends up in a different kind of jail. 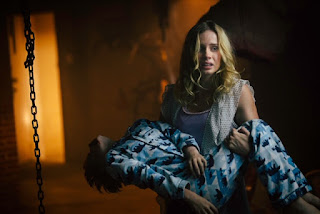 What hasn’t been mentioned is the other side of this story, the true horror side. He’s been kidnapped by a family with a very special secret. The kind of secret that has left him hanging, tied up, and missing his foot. Of course he wakes up and freaks out, but he’s got some help to get out of there…himself. See what’s different about this story is that he sees another version of himself, and talks to him almost like his conscious. It’s an interesting route for the film to take, and one that totally works. It’s creates great humor in a really bad situation.

Another thing this movie does well is mix in a lot of flashbacks. As he tries to break free, the audience gets to see more and more of what happened in the bank, and why he got sentenced to jail. His alternate self is also involved in that situation, and has apparently been with him for awhile now. The audience also gets to see some of the family’s angle from the sister Alia (Meg Fraser), who wants out of the family. The audience gets to hear more about the family secret, but will have to wait until the final act to see it. 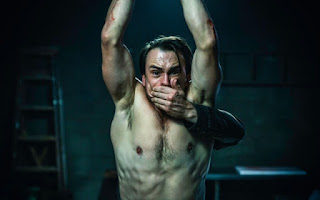 A final act that shows Rex, Alia, and his alternate self trying to escape the horrors of this household. There are several good deaths, and a monstrous surprise. They just might save the best death for last, which is both gruesome and funny. And just when everything seems to have returned somewhat to normal, they have one more fun scene to finish things off with.

While usually not a fan of flashbacks, this film uses them well to build the story. There are some nice twists and turns here, including what ultimately happens in the bank. Making Rex have an alternate personality to talk to adds the right amount of humor to the story, and gives the film something different to work with. Credit Ben for pulling off the additional role, and everyone who played a part of making the family so creepy. “Bloody Hell” was a whole lot of bloody fun all the way to the end. With that, I give it 4 pools of blood.

More info about this film at: http://promotehorror.com/2020/10/07/north-american-premiere-of-bloody-hell-at-nightstream/

Proud to say this review is quoted in this trailer... 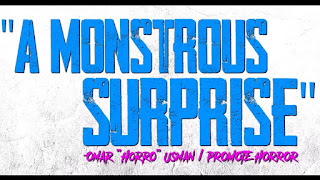