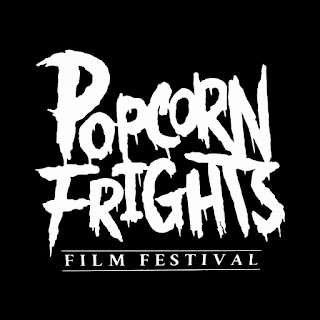 Each of the 5 film festivals that make up the Nightstream Virtual Film Festival submitted blocks of short films that were supposed to be shown at their festivals. Here, I've selected a block from the Popcorn Frights Film Festival called Midnighters, and have posted a brief review of each film. I definitely recommend you check out this block of films at the festival, or if you catch these films individually in the future.

Things start to change in the like of a depressed middle-aged woman when a mysterious mask appears at her doorstep.

Essie is alone and depressed when a mysterious package is left at her door. It’s a mask with very specific instructions to follow. She can’t avoid temptation, uses the mask, and starts to feel a lot better. Soon enough the horror begins when the voice behind the mask tempts her to break the rules. There’s a great dream sequence executed with great patience to make it work perfectly, and everything the audience would want in a face gone wrong. The final moments pick up nicely giving several scares, and a lasting image of what happens when you break the rules. Overall, it’s a great story that goes at a great pace, and includes some good scares with bloody, and disgusting images.

A reclusive college student is driven mad after picking a booger he can’t flick away.

Alone in his apartment, this college student picks a booger, and tries to get it off his finger. He can’t do it, and tries several times until it really starts to get to him. He starts to go mad in his room trying everything to get it off. As you might expect, this isn’t a normal booger, and it makes sure it isn’t going anywhere. He eventually goes so mad that he takes things to extreme measures all leading to a conclusion that will leave a smile on audience's faces. Overall, it’s easy to see where this idea came from, and they do an excellent job of creating a horror comedy out of it. And the funniest part just might be the ending.

During a plagued dust and wind storm in 1963, a countryman takes in a weary traveler seeking refuge, but discovers the truth in the circumstances of his arrival.

“The Howling Wind” sets the stage in what very well could be an episode of “The Twilight Zone.” A radio is playing letting people of the town know that a state of emergency has been declared, that they should stay indoors, and don’t get caught in the winds. Also, it notes to stay away from individuals caught in the wind because they can become unpredictable and dangerous. Arnold is taking the warning seriously, and boards up his farm house before sitting down for a drink. However, he might have made a mistake letting a man sneak inside, and stay the night. Overall, if there was ever an atmospheric film this is it. There are some great performances, but weird enough the radio might be the star of the show.

Alice comes face-to-face with her reflection.

Alice is in a hallway with a big mirror at the end of it. She’s moving closer to it very slowly, as she's looking at herself. She suddenly realizes the reflection in the mirror is moving closer to her. Apparently her reflection wants to do away with her. The film does some nice tricks with how it uses the reflection of her, especially in one moment that they are almost on top of each other. Overall, they do a wonderful job of creating tension, suspense, and even a couple of scares in just under 3 minutes.

An insecure teenager deletes her social media accounts and learns that what she put online will come back to haunt her.

A young girl has had enough with a social media app called Selfie. She opens it, deletes all the images, and then the app itself. Since the images didn’t seem to be of her it appears to be the right thing to do. However, the image wasn’t prepared to be deleted, and now has come to her house to get revenge. The film immediately makes the audience feel sorry for the teen, and then will double down on that by the end. It gets dark and creepy real fast, and creates a selfie image that will be stuck in the audience’s heads well after the conclusion. Overall this film sets things up well, and ends in such a creepy, and bone crushing way.

Jill’s got the snake. Julia’s got the flute. Alone, they have nothing. But together, they have a secret weapon to fight the darkness…

Two women stop at a gas station with a little car trouble. As they work to fix it they are harassed by two drunk guys. One girl has had enough, and confronts the guy with a big mouth. It’s not so funny for him when she pulls a gun on him. There’s more back and forth until something appears that shocks the guys, and will definitely surprise the audience. After watching this short, it seems like it would have been a great opening for a much bigger story. Overall, this film exhibits great patience getting to its surprise, and then reveals it in a terrific way. It will definitely leave audiences wanting to know what happens next with these women, and their surprise.

Having survived a harrowing plane crash, an army pilot finds himself suspended from a canopy of trees high above the forest floor by his parachute. After making contact with his co-pilot on the ground, they realize that something is stalking them in the dark.

Parachuting from a plane, and getting stuck in some trees is bad enough. Then throw in something roaming around the woods below you to really get the fear going. Something is stalking this pilot and his partner, but they aren’t sure what. Whatever it is it makes a terrible laugh almost like a hyena. Overall, this film picks a great situation to add the horror element to, but it would have been nice to see a little more of the horror. It builds some good tension and suspense, but takes the fun part off screen and into the credits.

Kerry is at a sleepover with the socially awkward, mysteriously orphaned heiress Katie. Friendship — in a society that grows ever isolating — is explored as Kerry learns the hard way that Katie always gets what she wants.

At first the audience might think these two are great friends. However, this is a different kind of friendship. One in which comes by the way of payment. This film brings the horror with Katie’s obsession to have Kerry as her friend one way or the another. Overall the back and forth between the two women is great especially while sitting down for some waffles. The waffles add some humor to the story along with their sleepover fun, but the best part might be the small twist at the end.

A young boy just can’t help himself, and just wants one sweet after another. With no one paying attention him, he goes outside, and heads to the sound of the ice cream truck. What’s freaky here is that the ice cream man is hidden in darkness, and all the audience can see is a hand. It gives the boy an ice cream cone, but it won’t come free. Overall, the mysterious interaction between the boy and ice cream man is freaky, and as sad as it is what happens to the boy is perfect for the story. Whether it gets a final scream out of the audience or not might depend on how much the audience likes it.