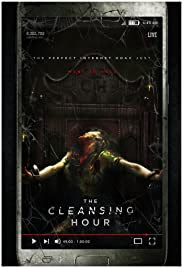 Another successful “exorcism” streamed online - or so it seems. Can the “exorcist,” producer and their team bring the ratings up? Ratings skyrocket, when a real demon gets involved.

“The Cleansing Hour” looks to cleanse audiences of any thoughts that there can’t be fresh ideas in exorcism movies. It opens in the middle of a dramatic exorcism that doesn’t seem to be going well. However, Father Max (Ryan Guzman) appears to dig down deep, and vanquishs the demon. Nothing is as it seems because this was all done for an online audience. Max falls short of being a real man of faith, and instead is about ratings and having a good time.

Well he’s about to get a ratings boast, and the good times are about to end quickly. The show’s producer Drew (Kyle Gallner) has to use his girlfriend Lane (Alex Angelis) as the next victim of possession when another scheduled guest misses the show. He ensures her that everything will be fine while not knowing some strange things are happening behind the scenes. Max kicks off the show with his usual fake antics, and Lane is supposed to follow along. Unfortunately this fake reality show is about to become extremely real. 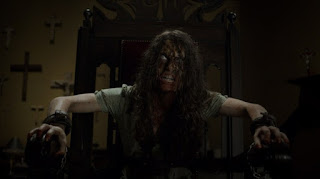 The first thing to appreciate about this film is the different angle on the exorcism. Audiences don’t get the usual sad story of someone getting possessed, and tied down until they can be saved. Here everything is fake until it’s not. The show is about gaining followers, popularity, and money. When the demon takes over it teaches them the cost of fame.

Speaking of the demon, this is definitely a nasty one. The audience doesn’t get to know a lot about Lane before she gets volunteered for the chair, but she seems like a nice girl. The demon is totally different, and definitely into torturing the crew. It’s playing a game with them, and makes them reveal everything. Whoever usually plays the possessed person has physical challenges to meet, and Alex definitely does that well. 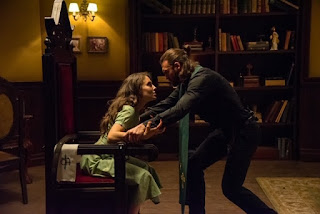 Then there’s Max, who is most exposed by the demon. His secrets are all over the internet, as he fights to survive. The internet angle is interesting because the audience gets to see the show’s followers, and how they react to what’s going on. They take it a little further, and the audience gets a bonus treat when it comes to the followers.

“The Cleansing Hour” proves that there are still new places for exorcisms to go. They bring in the reality show as a new setting, and involve the viewers in a good way. Instead of having a real priest save the day fake Father Max is forced to admit his sins and use what he does know about exorcisms to survive. The demon plays a good game with them, and certainly creates some cringe worthy moments. Alex stands out as the demon, but the whole cast does a great job. The hour has come for me to give judgement on this film, and I give it 3 pools of blood.

More info about this film at: http://promotehorror.com/2020/10/07/the-cleansing-hour-comes-to-shudder/