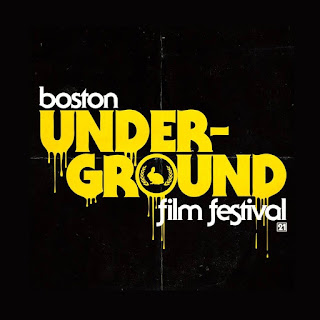 Each of the 5 film festivals that make up the Nightstream Virtual Film Festival submitted blocks of short films that were supposed to be shown at their festivals. Here, I've selected one short film from the each of the blocks of films to be shown at the Boston Underground Film Festival, and have posted a brief review. I definitely recommend you check out these films at the festival, or if you catch these films individually in the future.

A man who apparently isn’t happy with his life prepares for a sacrifice. He does everything right, and is able to conjure up a demon. He asks her for strength and power not to be taken advantage of anymore. She asks him what he will be sacrificing, and he offers the blood of his first born son. This is when a hilarious twists is dropped on the audience, and this poor guy. The comedy doesn’t stop there, as it offers a few more funny moments before it ends. Overall, this is definitely worth seeing just for the twist alone, and it’s a bonus to enjoy a few more laughs at the finish.

In this handcrafted epic puppet film set in a world of demons and ghosts, a lone samurai and his odd companion, a cursed severed head, seek vengeance in a haunted world.

A swordsman is out for the revenge of his murdered shogun. He climbs a mountain in search of where his enemy hides, and brings along a talking head. The head tells him how challenging this task will be, and doesn’t exactly inspire faith in the swordsman accomplishing his mission. Overall, this is an extremely well done film featuring puppets with an interesting story, and creepy characters. It all leads to a very exciting and dramatic conclusion that seems like only the beginning for the swordsman.

Come Be Creepy With Us

Anna, a young woman stuck in the midst of a quarter-life crisis, learns how to keep on living after being haunted by the undead spirit from her summer camp past.

Anna is being haunted by what seems like dreams until her friends witness something weird as well. They leave her alone, and she calls out whatever is haunting her. Just when the film looks like it’s going to go dark it spins in another direction. Overall, the sudden change really works, and kind of takes the audience back to Friday the 13th in a different way. And just when the audience gets into whats going on, it has one more twist that will leave the audience wondering what really happened.

It’s 1692 and Puritan Style Guru Sarah Winsley is worried she may have a witch problem.

Start by imagining that YouTube existed in 1692. That’s funny enough, but then throw in Sarah, who seems to be making videos to help the other woman around her. Unfortunately, she starts to think another woman is a witch, and has put a curse on her. Her videos get worse and worse as she finally spins out of control, and tells a wild story of this woman becoming a blue boar. Overall, it’s entertaining enough to think of using YouTube back then, but Sarah is a treat to watch. Yes, the audience might feel sorry for her, but she’s very funny in her story telling and YouTube set up.

Eli makes an unusual ode to his departed child.

A man is grieving the loss of his child, and is unsure what to do next. He sees a news story about a guy using balloons to fly, and decides to try it. He heads to the store, and gets everything he needs. He builds this giant net of balloons, and starts to let it climb. With neighbors watching, the balloons start to rise, and everyone will be surprised with what happens next. Overall, there isn’t a lot said in this film, but it will leave plenty to talk about in the end. As the audience waits to see what the man builds, they probably won’t expect this shocking ending.