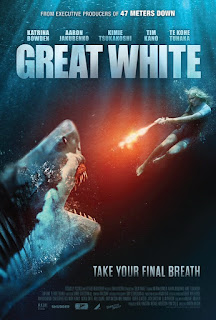 A fun filled flight to a remote atoll turns into a nightmare for five passengers when their seaplane is destroyed in a freak accident and they are trapped on a raft, 100 miles from ashore with man-eating sharks lurking beneath the surface.

The “Great White” is fantastic to watch on Shark Week, and even more deadly here. Kaz (Katrina Bowden) and Charlie (Aaron Jakubenko) are looking forward to expanding their family and business. Kaz is pregnant and their tour business has just booked another flight. This flight is for another couple, Michelle (Kimie Tsukakoshi) and Joji (Tim Kano). Michelle is looking for some time not only for the couple, but also to honor her grandfather.

The trip starts off fine, as they find a nice place to land, and take in the view. Unfortunately this view comes with a dead body that has washed ashore. This puts an end to the trip, but they can’t leave without finding out what might have happened to this person. They soon will find what happened to this person could very likely happen to themselves when a Great White shark leaves them stranded in the ocean. 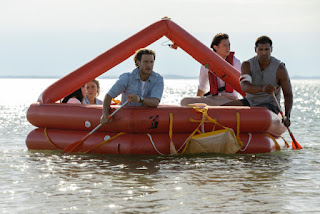 It’s a shark movie so lets start with the sharks. They use a combination of shark footage, CGI, and animatronics to make their sharks work, and do a pretty good job of it. It never looks overly fake, but those experienced watching these kinds of shark movies will generally know what to expect and when. There’s actually a really good attack while the survivors are in the raft at night because it’s not too obvious and happens quickly. Unfortunately there’s not enough blood to be seen, as most of the victims are taken underwater.

As much as the audience would love to see sharks circling their prey for an hour an and half, they know by now that’s not happening. The film does spend some time highlighting the relationships of the couples. There’s constant reminders that Kaz is pregnant making Charlie even more over protective of her. On the other side, Joji is easily made out to be the bad guy here. Michelle continually has to calm him down, but in a way that shows he’s still the one in charge. No tears will be shed if he falls overboard. Benny (Te Kohe Tuhaka), who accompanies the group as the cook and assistant, is a welcomed addition for his comedic moments and egging Joji on. 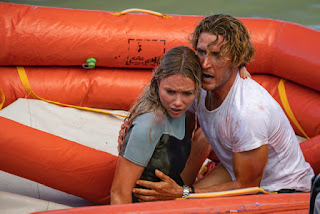 In the end, “Great White” presents everything one would expect from a serious shark movie. It opens with a good kill, and then dives into character introductions. Eventually the group will get stranded left at the mercy of the shark. The death scenes are pulled off nicely, but just a little light on blood. There’s a twist in the final act that helps build the excitement in the group’s fight to survive. With that, I give it 3 pools of blood.

Great White is available in Theaters, On Demand and Digital July 16