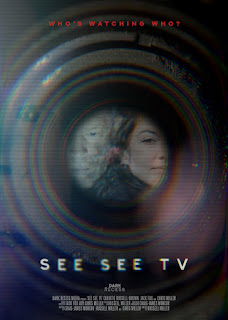 The film looks at what happens when a person is given unauthorized access to someone else's life, as well as the consequences of voyeurism and surveillance.

“See See TV” sounds like a cool new station, but you might want to be careful if you watch unscheduled programs. This short film opens with a man getting a new security system put in. While talking with the installer, they look over to the guy’s pretty neighbor taking out the garbage. The installer notes that he put in a system for her recently, and the man thinks about that has he says hello to her.

Later on the man is looking at his system on the computer, and going through the cameras. He eventually notices the name of his neighbor on one of the files. While he resists for the moment, he can’t resist for long. Before he knows it, he becomes a full out stalker watching her home cameras at all times of day. It’s all good for him until he witnesses something very unexpected.

Outside of the opening conversation, this short film doesn’t have a lot of dialogue. Instead it’s much about keeping a nice pace, and making the audience wonder where this is going. The man here seems like an average guy, but what he starts doing makes him creepy. However, that’s nothing compared to what happens in the final moments. It ups the creep level, and leads to a surprising ending. Now it’s your turn to “See See TV” in the video below!