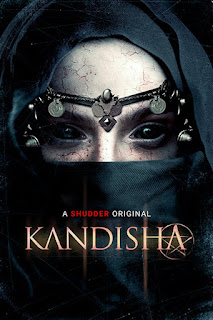 It’s summer break and best friends Amélie, Bintou and Morjana hang together with other neighborhood teens. Nightly, they have fun sharing scary stories and urban legends. But when Amélie is assaulted by her ex, she remembers the story of Kandisha, a powerful and vengeful demon. Afraid and upset, Amélie summons her. The next day, her ex is found dead. The legend is true and now Kandisha is on a killing spree— and it’s up to the three girls to break the curse.

Directed and written by: Julien Maury and Alexandre Bustillo

This group of friends will soon find saying “Kandisha” in front of a mirror is no better than saying “Candyman,” or “Bloody Mary.” With summer time in full swing, friends Amelie (Mathilde Lamusse), Bintou (Suzy Bemba), and Morjana (Samarcande Saadi) have spent their time spray painting, and hanging out. One night they end up telling some ghost stories, and talking about urban legends. Of course there’s plenty of doubt in the truth of any of the stories, including one about Kandisha.

Kandisha apparently is a great demon to summon if someone is in need of revenge. It turns out that Amelie is attacked on the way home by an ex-boyfriend. Being so upset and hurt, she wastes little time seeing if the legend of Kandisha is true. Kandisha makes an appearance and executes her level of revenge for Amelie. However, Kandisha isn’t going to stop there, as she has some more killing in store. 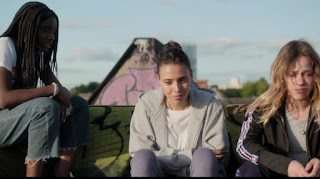 While there’s some set up of the legend of Kandisha, the most important thing the audience will be left with is that she’s a true killer. Once she has her potential victim in site, it’s all over for them. Some of her kills are pretty brutal assuming that’s the way to go when getting revenge. Two of the best kills don’t get much more painful, as one is twisted up, and the other is torn apart.

While Kandisha is supposed to have a seductive aspect to her, the audience probably won’t find her that way. The further away people are from her the better. Besides the great kills, one of the most interesting things about her is the way to do away with her. No spoilers here, but it’s actually a little sad, but fitting. It leads to a dramatic final act, and an interesting closing scene. 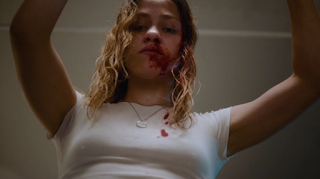 With the film being subtitled it’s a little hard to get close with this group of friends. They certainly did some interesting things while spray painting to say the least. Kandisha might not be as interesting as a character like say “Candyman,” but there’s no doubt she can hold her own when it comes to kills. She’ll be almost impossible to escape, gets creepier as the film rolls on, and is wonderfully brutal. With that, I give “Kandisha” 2.5 pools of blood, and won’t be calling her for revenge anytime soon!