THE BOY BEHIND THE DOOR REVIEW 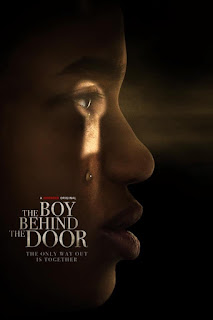 After Bobby and his best friend Kevin are kidnapped and taken to a strange house in the middle of nowhere, Bobby manages to escape. But as he starts to make a break for it, he hears Kevin’s screams for help and realizes he can’t leave his friend behind.

“The Boy Behind the Door” is hiding and for a very good reason. Bobby (Lonnie Chavis) and Kevin (Ezra Dewey) are playing catch together in the park, and have a quick conversation about life plans. They seem a little young for that kind of talk, but make it clear they will be friends until the end. It won’t be long before their friendship is tested because they’re about to be kidnapped.

They get taken to a home where Kevin is brought inside, but Bobby is left in the trunk to suffocate. Fortunately for him, he manages to get out, but before running for his life he hears Kevin screaming. Remembering their earlier conversation, he realizes he can’t leave Kevin behind so he sneaks inside to rescue him. Of course it’s not going to be easy because the kidnappers have plans for Kevin.

Being kids, it’s easy to root for Bobby and Kevin. However in just a matter of minutes this film will seal the bond between the two, and the audience. Once Bobby decides to go in the house the audience will be right with him on his rescue mission. It’s not going to be easy, and Bobby could’ve given up several times. To their credit, they both prove what being a friend really means.

Besides bonding the friends, the film does well to maintain the realism of the situation for the boys. Both are terribly afraid the entire time, and nothing is easy for Bobby in trying to get his friend out. He stays true to his age, not knowing what to do with an old phone, or how to drive a car. He kind of lucks out with one of the kidnappers, but Ms. Burton (Kristin Bauer van Straten) has no mercy for either of them. One of the best scenes involves a foot and a finger (leaving it at that). The audience will not only be with them, they’ll feel their pain.

Kidnapping children is a serious issue, and “The Boy Behind the Door” treats it as such. Besides the few moments playing catch in the park, the film is at the house where things are dark and the tension is high. Lonnie and Ezra do a great job bringing out the true pain and emotions of their characters in this situation. Keeping with the realism of the film, the kidnappers didn’t shy away from bringing the pain either, as sad as it is to see for the boys. In the end, it’s a great story displaying the true test of a friendship. With that, I give it 3 pools of blood.