ON THE TRAIL OF UFOS: DARK SKY REVIEW 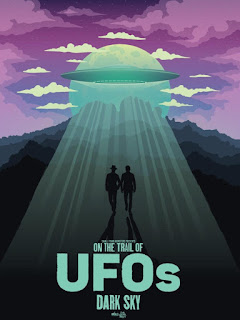 On the Trail of UFOs: Dark Sky traces decades of reports of mysterious objects, creatures and enigmatic beings seemingly not of this earth. Tracking reports around the state of West Virginia, the film retraces steps taken in previous Small Town Monsters productions while digging deeper into the mysteries around us.

With all the talk recently about alien sightings by the government, it’s the perfect time for a documentary like “On the Trail of UFOs: Dark Sky” to be released. This is a follow up to the 2020 release of “On the Trail of UFOs: Season 1,” which was extremely well received. This just proves that aliens are indeed a hot topic, as people scramble for the truth. One of those people hitting the pavement in search of that truth is Shannon LeGro. For this documentary, she explores the dark sky above West Virginia.

Apparently West Virginia has seen a lot of activity in their skies. Shannon interviews a great deal of people from different parts of the state about their experiences with UFOs. The documentary gives a good amount of attention to these stories, and letting the people tell their stories clearly. None of the people look like they’re just telling stories for the hell of it, but one can never be 100% sure. What’s lacking from many of the stories is proof from the people, or a good amount of witnesses from the same so-called event.

Speaking of proof, there’s a moment when the crew seems to catch something odd in the sky above them one night. They’re certain they see a strange object in the sky, and it’s shown to the audience as well. Besides just looking for proof, they also explore a possible reason for this state having a lot of activity. They talk about the many mines around the state, and that does seem like a logical possibility.

In the end, it will be up to the audience to decide if what’s discussed here is real or not. The documentary crew does a good job of taking a state, and narrowing down on the UFO sightings there. They let the people living there make the case, and try to help recreate some of the descriptions as best they can. They explore reasons for the activity, and dive into some other interesting topics along the way. If you’re into this rebirth of UFO excitement then “On the Trail of UFOs: Dark Sky” will be for you. With that, I give it 3 pools of blood, and am glad there are no mines near here!