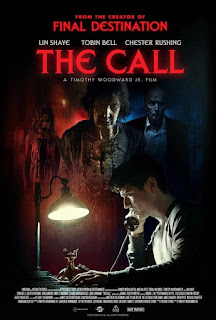 In the fall of 1987, a group of small-town friends must survive the night in the home of a sinister couple after a tragic accident brings them to the couple’s door.

This is “The Call” you don’t want to make! Chris (Chester Rushing) is the new kid in school, and quickly befriends Tonya (Erin Sanders). She seems nice at first, as she’s tasked with showing him around the school. Later she introduces him to her friends Zack (Mike Manning) and Brett (Sloane Morgan Siegel), and they all share a story with him. A story about how Tonya’s sister died under the care of a woman named Edith Cranston (Lin Shaye).

The group has done their best to make Edith’s life miserable like throwing rocks at her house. Edith confronts the teens including Chris, and makes it clear she will never back down from them. Unfortunately, later that night death comes for her, but this is only the beginning. Her husband, Edward (Tobin Bell), invites the group over a few days later with promises of money if they make a simple phone call. A call that might end up being their last!

Having Lin Shaye’s and Tobin Bell’s names attached to this film will have horror fans gravitating to it. They are a big part of the film, but probably don’t get as much screen time as fans would want. However, they do make the most of it. Tobin sets up the rules for their calls in the way horror fans loving hearing him do. Lin gets a little more down and dirty looking especially frightful later on. Just think of her like the operator from hell.

The fun here obviously comes when the teens make their call. Each call leads to them revisiting some dark moments in their past. The audience will find out why they are so quick to do bad things in their current lives. The audience will also find that some of the teens have a much darker past then expected. The interesting thing this story does is make the audience question who the bad people really are. Is it the teens, or the elderly couple?

“The Call” sets up some teens with an interesting opportunity. Make a phone call, stay on the line for a minute, and receive $100,000. Of course it’s not going to be that simple when a Tobin Bell character introduces the game, and a Lin Shaye character is on the other end of the call. The past definitely comes back to haunt all of them leaving the audience to wonder who they should really feel sorry for. With that, I give it 2.5 pools of blood.