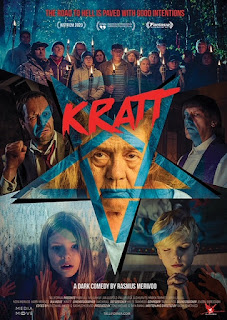 Children are left at grandma’s house without threat smartphones. Real life seems boring until they find instructions for kratt - a magical creature who will do whatever its master says. All they need now is to buy a soul from the devil.

Directed and written by: Rasmus Merivoo

What in the hell is a “Kratt?” Well siblings Mia (Nora Merivoo) and Kevin (Harri Merivoo) will eventually find out. First they have grandma (Mari Lill) to deal with, as their parents have left them with her for a few days. Grandma’s house isn’t a fun place for them because there’s a serious lack of internet at the house, or anywhere near there. That leaves them to listen to grandma tell them about the importance of doing chores around the house and farm.

Boring! Mia and Kevin have little interest in the chores, and become increasingly desperate to get back on the internet. They meet a couple of new friends, who also crave some social media exposure. The best they can suggest is to use the computers in the local library. They’re still out of luck because the library is making some changes, and the computers aren’t working. The best they can do is find a book with some strange writing and symbols. There fun is finally about to happen at the hands of the Kratt.

Before tackling the Kratt, the movie appears to be making a statement on the use of social media by kids. The kids are obviously obsessed with social media unlike past generations who spent more of their time doing chores. Grandma shows them the importance of the work around the place, but they just don’t get it. Some people also think kids will just find trouble on the internet, but these kids actually find trouble when they don’t have their phones to play with.

The kids use the book to conjure up the Kratt. They don’t do it exactly right and end up turning grandma into it instead. That should be a bad thing, but now grandma will be doing the chores while they try to have as much fun as possible. The Kratt is probably the last creature to use social media because it’s all about doing work. The kids have to continue to give it new chores, or its murderous side will come out. As expected, the kids get bored with Kratt eventually, and then the audience gets treated to an interesting pizza party.

Mia and Kevin are likable kids regardless of their need for social media, and some in-fighting. They provide some amusement before the Kratt takes over. The audience might think to fear the Kratt, but grandma actually looks hilarious especially because of her hair. Then again, the audience will get a chance to see why people should be afraid of the Kratt when grandma helps someone else with a chore the Kratt took too seriously. In the end, “Kratt” is a fun movie despite chances to be darker, and maybe a few things that probably make more sense to an Estonian audience. I give it 3 pools of blood!

“Kratt” is playing as part of the 2021 Fantasia Film Festival.