NO MAN OF GOD REVIEW 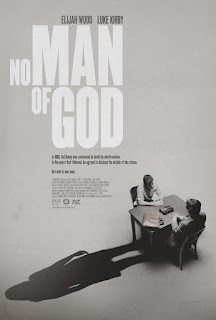 In 1980, Ted Bundy was sentenced to death by electrocution. In the years that followed, he agreed to disclose the details of his crimes, but only to one man. NO MAN OF GOD is based on the true story of the strange and complicated relationship that developed between FBI agent Bill Hammier and an incarcerated Ted Bundy in the years leading to Bundy’s execution.

Well it’s pretty safe to say Ted Bundy (Luke Kirby) is “No Man of God.” It’s hard to image many prisoners on death row doing anything important on their way out, but it appears Ted Bundy might have. In the time leading up to his death day, FBI agent Bill Hammier (Elijah Wood) volunteered to speak with Ted in hopes of getting inside the mind of a killer. Bill and the FBI hoped to learn things that will help catch killers in the future. Not a bad idea, but first Bill would have to earn Ted’s trust, which wasn’t going to be easy.

Well Bill managed to get Ted to agree to a first meeting, and intrigued him enough for an eventual second meeting. Bill had to play it very carefully to start because at anytime Ted could refuse to see him, and that would be it. He even lets Ted know that Ted is the more educated of the two, almost giving him the power in the room. However over the course of their conversations things become more balanced, and they certainly have an effect on each other by the end.

When it comes to Bundy, it might seem like audiences would want to explore him finding and killing his victims. However, that has been done many times over, so credit this film for trying a different angle. There’s a lot to Ted’s life, and a part where he might have done something good shouldn’t be ignored. The film supposedly is based off of notes and interviews Bill had from their conversations.

Of course this puts most of the film on the shoulders of Elijah and Luke. Not only do they have to fit into the roles, but they also need to form whatever bond Bill and Ted seemed to have formed. At first it didn’t seem like Elijah was going to fit, but that was probably more to do with his character being a younger agent. He couldn’t come off as someone who knew everything, and was out to prove he’s smarter than Ted. On the other hand, Luke plays it more measured throughout. Looking at him, the audience wouldn’t think he’s in jail, but the longer the conversations go on the more there will be an uneasy vibe coming from him. The two actors do seem to grow into the roles well as their characters spend more and more time together, and get into the more interesting topics of conversation. 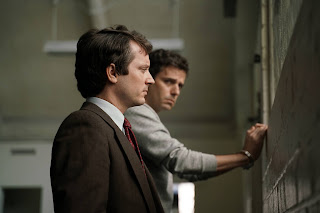 As the audience watches the two men do their back-and-forth it might strike memories of Dr. Lector and Clarice playing their own cat and mouse game. It’s clear to see “The Silence of the Lambs” picking up on the same theme here. Whether it truly happened or not, it’s interesting to see the true test Bill is under having to go through process. A man of faith, he’s definitely challenged by everything Ted has done, and says to him. It’s also intriguing to see how their relationship comes to an end obviously with Ted’s death sentence coming to an end. Maybe not the ideal direction for a Ted Buddy movie, “No Man of God” is one that works because of two strong performances, and watching an unusual bond form between two different men. With that, I give it 3 pools of blood.

NO MAN OF GOD is available In Theaters, On Demand and Digital August 27