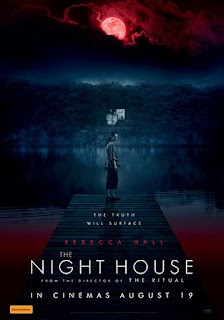 “The Night House” is beautiful during the day, but not the place for a widow at night! Beth (Rebecca Hall) has just lost her husband to a tragic suicide, and is left to grieve in their house by a lake. A nearby neighbor, and a good friend try to be there for her, but it’s hard being alone. That is…if she’s really alone.

While trying to keep busy at night she starts to feel like something or someone is there with her. Either that or grief has her losing her mind. Maybe it’s her husband trying to communicate with her from the other side. Surely she would want that on some level, but then again maybe not after she starts to find some of the secrets he’s been hiding. She’ll need to figure out what the big secret is before whatever it is in the house makes its intentions known.

Lots of horror fans are looking at this movie because of the potential scares so lets start there. There’s no doubt there will be enough attempts to scare the audience if it can. Being a movie with a ghost or entity, there are a few moments where something appears to move all of the sudden. It may or may not get fans, but if they see it in theaters they will definitely hear that scare happening. The sound is amped up, and certainly helps one of the best scares when a radio goes off. If not scary, the final act will be full of tension, and have plenty of dramatics.

While the effectiveness of the scares might be a matter of opinion, it’s probably fair to say most fans will have praise for Rebecca Hall’s performance. While not the most important scene, she sets the stage for what her character is feeling in an awkward yet funny parent-teacher exchange. It’s also telling of how her character interacts with others, and she’s great again when Beth has to deal with a woman who’s involved with her husband. Then there are the moments when Beth is battling something that’s not there, and Rebecca brings out every terrifying moment of that experience, especially in the final act.

Audiences are looking at “The Night House” for scares, and there will be plenty coming their way. Some may jump, while others start to get sucked into the building tension and mystery. Actually there might be a little too much mystery, as the story may not be so easy to follow. Regardless of scares, or how the story plays out, audiences will definitely be treated to a performance worth seeing by Rebecca. With that, I give it 3.5 pools of blood.

“The Night House” played as part of the 2021 Popcorn Frights Film Festival.