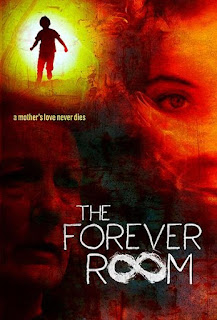 Claire wakes one day to find herself chained in a basement. Her horror is amplified when she discovers that her captor is her own mother. Helen assures Claire that the situation is necessary and “for her own good.” And to add to Claire’s terror, in the days and nights to follow she is beset by strange apparitions and frightening experiences, finding herself precariously balanced on a razor’s edge between reality and insanity, and ultimately forced to face a dark truth.

“The Forever Room” isn’t a place anyone wants to be. For Claire (Samantha Valletta) it really might be the only place for her whether she wants to be there or not. She has been locked in a basement for awhile now by someone a little surprising…her own mother Helen (Vickie Hicks). Even though Helen has her daughter locked up, and still treats her well. She brings her food and drink, and is willing to help her with baths.

Claire resists eating and cooperating with her mom. She has no idea why she has been locked up, and just wants her mom to let her go. Of course mom isn’t about to do that, nor will she let Claire know the real reason for what’s going on here. It’s something that Claire and the audience will have to figure out on their own.

Having Claire trapped in the same room for most of the movie certainly helps out an indie horror film budget wise. However, it puts a lot of pressure on the actors to keep things interesting, and that becomes a problem here. Some of the back and forth between mother and daughter is alright, and other times it’s too slow. Later they try to spook Claire and the audience with some visitors. They might be ghosts or just her imagination, but probably won’t get the audience jumping out of their seats. Either way, they’re a big clue to what’s really going on here.

When the big twist is revealed it isn’t too bad. It finally puts some action into the movie that the audience needs having watching Claire mostly in the room. It won’t be the most shocking twist ever, but probably a little more extreme then expected. Again the issue is keeping the audience entertained and engaged getting to this twist, and it just doesn’t do enough of it. With that, I give “The Forever Room” 1.5 pools of blood.