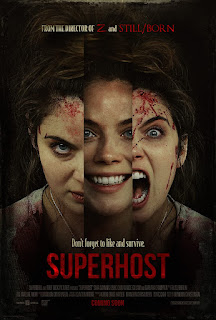 With their follower count dwindling, travel vloggers Teddy and Claire pivot to creating viral content around their most recent “superhost,” Rebecca, who wants more from the duo than a great review.

Directed and written by: Brandon Christensen

A host can be good enough, but be warned if you need a “Superhost.” Claire (Sara Canning) and Teddy (Osric Chau) are a couple who have created a vlog about vacation homes. They rate the home along with interviewing the 'superhost' who is renting out the place. The vlog had been pretty successful, but not long after arriving at their latest location they find they've been losing followers. Hopefully this will turn out to be a super trip where they can regain fans, and even become closer as a couple.

Yea, that would all be nice, but horror fans know trips into the middle of nowhere rarely end well. The home they arrive at is beautiful inside and out, and at first glance should deserve a good rating. However, there’s a plumbing issue, and maybe a few too many security cameras inside. Oh…and then there’s Rebecca (Gracie Gillam). The awkward and overly friendly superhost, who is eager to please the couple even if it makes her uncomfortable. She will go above and beyond to get a good rating, and gives them a killer video for their channel. 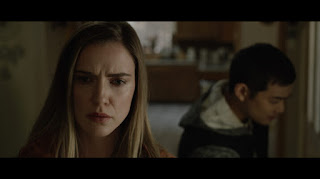 For a movie to be as good as this one is there needs to be something special about it, and that something special is Gracie Gillam. Her performance is absolutely fabulous. Director/writer Brandon Christensen described her character best when mentioning needing  someone who could work for Disney and put on that extra happy face, and then go to the other extreme. The audience will be staring at Rebecca trying to figure her out just like Claire and Teddy. She’ll make the audience laugh while making the couple scratch their heads. And then Rebecca will flip the switch and be someone you wouldn’t even want watching the Disney channel. As good as Gracie is early on, she's even more brilliant in the final act of the film.

Of course that’s not to take away from any of the other performances. Sara and Osric mix well playing the couple. They’re especially fun to watch when they’re recording for the channel. Horror icon Barbara Crampton has a brief role, but makes every second count. Everyone plays their role just right to pull this story off. A story that will definitely take a shot or two at vloggers, and highlight the dangers of staying in other people’s homes. 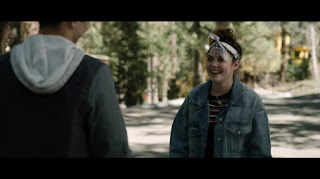 “Superhost” is definitely a supermovie for many reasons. Gracie puts on a performance that horror fans will be buzzing about for a long time. If the audience thinks there’s something wrong with her early on just wait until she shows her true colors. Sara and Osric do exactly what’s needed to make their characters work, and it’s always great to have a horror icon like Barbara Crampton make even a brief appearance. The story sets up well with a couple that’s trying to grow both online and together, and finding both hard to maintain. So hard, they can’t realize the true danger hiding right in front of them. With that, I give this film 4.5 superpools of blood, and would 'like' and 'subscribe' many times over to see more of Rebecca!

“Superhost” played as part of the 2021 Popcorn Frights Film Festival. It will also be coming to Shudder in September.