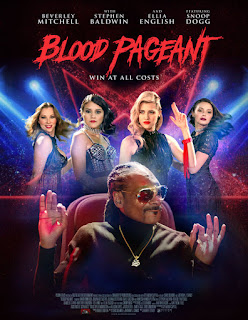 What begins as a million-dollar reality show competition between seven beautiful women turns into a battle for like itself when one contestant uses magic to gain an edge over the competition. An ancient curse dating back to the Salem Witch Trials is unleashed and the competition becomes a pageant of death, destruction, and evil forces. Forget about who will win - who will survive?

Not really one for pageants, but a “Blood Pageant” sounds a little more like it! Lots of pageant winners and reality stars seem like they were made for that life. At first glance, Amy (Juliana Destefano) might not seem like she fits that world, but she has a desire to be in it. She reaches out for some help from Liz (Natasha Blasick), who seems to have an unusual technique to prepare Amy for the competition. Regardless of the technique, it certainly makes Amy ready to take this competition by storm.

She arrives at the home where the show will be shot along with the other contestants. All of them are quick to stake their claim as being the eventual winner, even to a lesser degree the ever so religious Crystal (JoAnna de Castro). Amy and Crystal do seem a little behind some of the other woman who appear more open to sucking up to the producer Barry (David Chokachi). However, no one knows it but Amy has a secret weapon that will literally eliminate the competition.

Anyone who channel surfs these days knows the large amount of reality/game shows to be found on tv. While they do entertain some, others wouldn’t mind seeing less of them. The movie takes aim at aspects of these kind of shows, and certainly makes light of them particularly what goes on behind the scenes. The contestants show the usual distain for each other, and are only concerned about themselves. The audience will get a lot of set up, and introduction into the reality for the early half of the movie.

Amy might not realize what she’s doing, but horror fans will soon be clued in on what's happening here. She has a board of contestants up in her room, and they’re getting marked off quickly. The competition soon comes to an end after some ladies die while trying to win bonus points with Barry in a truly wild scene. The competition might be over, but there’s still a killer lurking around the house. It turns out there’s a lot more going on here than originally thought, and it comes to a very dramatic ending.

Lots of reality shows go big, and this one does as well. Barry, along with the rest of the crew, do their best to stir it up with the women, and create some theatrics that should give the audience some laughs. Soon enough the laughs fade because the body count will rise. Blood is spilled, and a mystery is solved. And if that isn’t enough, Snoop Dogg, Stephen Baldwin, and some more familiar faces make an appearance. With that said, this competition is over and I give "Blood Pageant" 3 pools of blood.