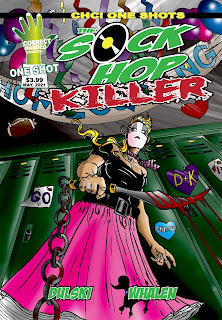 One young woman learns the lesson of heartbreak the hard way after being dumped the night of the big dance and her grief calls a menacing object connecting her to an ancient power that her ancestors could not control. As the Homecoming dance grows near and the body count rises, a cursed family heirloom returns to punish the deception and misery for a generation of women. What will it take to end the plague of an ancient mask and release the wearer that hides behind the hurt and rage of a lifetime of suffering? The Sock Hop Killer is our homage to the Slasher Horror Genre of the 80’s.

This story begins with circumstances that create a new masked killer. Something has gone terribly wrong in this family that has given rise to this evil. It’s born of pain, and turns that pain onto others. After seeing these tragic events, the killer disappears for some time, and the family gets to move on.

The story moves forward to Janice, who’s excited for the school dance. Along with her mom and Gary, she goes to grandma’s house to get some clothes to fit the dance’s theme. She finds what she’s looking for, and a mysterious box of photos. By accident it seems she’s dug up the past, and the killer rises again.

“The Sock Hop Killer” is a short comic coming in at less than 30 pages. It makes for a quick read, as the story gets right to the point.  And while it’s a short story it feels like the door is open for some more chapters to the story if they want. I previewed it in black and white, which works well particularly for the most horrific moments. However, it looks even more spectacular in color. Most importantly the killer looks bad ass with the mask on and sword by their side! Check out the comic today on Amazon, or catch it coming soon to ComiXology!