THE EVIL NEXT DOOR REVIEW 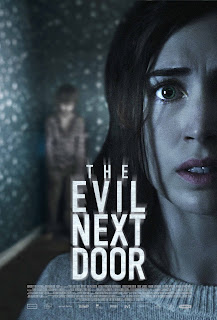 A dad moves into a new house with his son and girlfriend. When he’s out of town working, the son makes a new “friend” next door.

Directed and written by: Tord Danielsson and Oskar Mellander

It seems like having “The Evil Next Door” is better than in your own house, but evil always seems to find you wherever you are! Fredrik (Linus Wahlegreen) and his girlfriend Shirin (Dilan Gwyn) are moving to a new home. Along with them is Fredrik’s young son, Lucas. After moving them in Fredrik has to go away for work letting Shirin and Lucas get in some bonding time. Fredrik wants to make sure Shirin is ready to take on a motherly role.

When the two aren’t bonding, Lucas seems to have found someone or something else to play with. Shirin is a little uncomfortable around the boy, but wants to make it work. At first, she isn’t quite sure what to make of his strange behavior, but soon enough she will realize something else is going on here. A supernatural being next door has come for him, and the question will become does she care enough about him to risk her life to save him?

There’s always something unnerving about watching a child play, and talk with something that’s not there. That continues to be the case here with Lucas making a new evil friend. As usual they keep these moments dark, and it only gets darker as it goes. They definitely will try and get some jump scares in the mix, and while expected some might work out just because of how creepy this supernatural being is. It certainly makes good use of the dark space.

What appears to be a little different this time around is the relationship between the major characters. Instead of having married parents with a child, the audience is presented a couple, one of which is a single parent. Not only that, but the story stresses if the potential stepmother to be is fit to take on that role. Certainly no one would hate Shirin if she ran away at the first sight of the supernatural being. Instead she powers through everything showing she can be that mother, and takes on the evil head on.

“The Evil Next Door” might present its scariest moments in the opening and ending scenes, but that doesn’t mean the audience should let their guard down at any moment. There will be other attempted scares, and some creepy moments courtesy of this monster from next door. When the tension drops, there will be time to watch the relationship between a young boy and potential stepmom grow. He might not realize it right away, but she really does love him and his father to do what she does. With that, I give it 3 pools of blood!

In theaters and on demand June 25th!