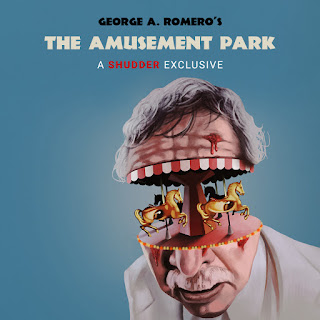 An elderly gentleman goes for what he assumes will be an ordinary day at the amusement park, only to find himself in the middle of a hellish nightmare instead.

Directed by: George A. Romero

Most people have fun at “The Amusement Park” but not this time around. The film opens a little differently with Lincoln Maazel giving a short speech about the experience of being an elderly person. He doesn’t paint a pretty picture, but sometimes the truth is hard to hear. It isn’t easy the older you get, and he’s about to prove that in an amusement park.

After the speech, the audience sees a familiar old man sitting in a waiting room. He doesn’t look to be in good shape, and soon another old man comes in the room smiling. The man is happy to be going into the amusement park, but the beat up old man tries to warn him it won’t be what he expects. He ignores the warning, goes into the park, and will eventually see how right the banged up old man was.

Sometimes horror works best when it’s ever so real, which is the case here. The movie isn’t your typical horror movie, and certainly not something fans are used to from George A. Romero. It takes the issue of being elderly in the U.S. head on, and brings out the horrors of it. The opening speech goes over it well, but the amusement park really drives home the point.

The amazement here is how they take the park and the common experiences in it, and use it to drive home their point. Things like starting off with elderly people turning in their most prized possessions and getting nothing for them in the form of tickets for the park. Another great example is the good old bumper car ride. While the point is to actually hit other cars, they change it up here and stage what it’s like for an elderly couple to have an accident. It gets truly sad when he gets an opportunity to read a story to a little girl, and gets little acknowledgment from her mother. Lincoln had such high spirits in the beginning, and things just continue to get worse as things go on.

What might be the scariest thing of all is that “The Amusement Park” was made over 40 years ago, and so much of it remains true today. While the beginning and ending speeches are powerful in their own right, the amusement park just makes everything that much more interesting. It’s a true credit to Romero and everyone who put this together. The creativity is off the charts, and the performance Lincoln puts on is great. The audience should appreciate how horror is used to make such a meaningful film. A film that really needs to be seen by more than the average horror fan. With that, I give it 4 pools of blood.