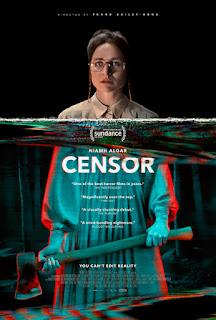 After viewing a strangely familiar video nasty, Enid, a film censor, sets out to solve the past mystery of her sister’s disappearance, embarking on a quest that dissolves the line between fiction and reality.

“Censor” is not a popular word for horror fans, but it works well for the title of this horror movie. Enid (Niamh Algar) is part of a group of people responsible for censoring horror movies. Fans of blood and guts scenes are at their mercy. Enid takes her job very seriously, probably more than those around her. That’s why it’s shocking when a colleague and her are blamed for not censoring a scene in a movie which leads to someone’s death.

This starts a slow, and surprising change in her. It triggers memories of the disappearance of her sister when they were younger. Her sister hasn’t been found, and Enid will never give up looking for her. She actually thinks she sees someone who looks like her in a video that a producer gives her. She goes on an investigation of her own, which brings her closer and closer to starring in her own horror movie!

For a film titled “Censor” there’s a whole lot of bloody moments in it, and no one is complaining. She’s rating borderline things like scenes involving eye gouging and rape, and the audience gets to watch along with her. That’s just a warm up to when Enid finds herself in her own bloody situations. The first time is an accident, but what follows is definitely on her hands.

It doesn’t seem like it at first, but Enid becomes a very interesting character. When she’s first introduced, she’s very serious, and all about doing the best job possible. She definitely isn’t a fan of horror, and her trauma is probably why. The film works at a slow pace, and so does her change. After seeing her in the opening moments, it would be hard to imagine her ending up where she eventually finds herself. They also do this giving the audience as little information about her as possible. Credit Niamh and her strong performance for helping pull this all off. 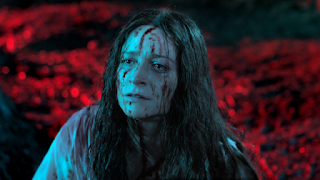 Admittingly, as “Censor” started off with a slow pace, and serious lead character I was doubting how much I would like this. However, it started to gain my interest with the bloody scenes Enid and company are trying to censor. I appreciate them showing the audience these scenes as Enid wants to censor them. The payoff here is just how far Enid really ends up going. It’s totally unexpected from the person the audience meets at the beginning. I’m certainly glad this film wasn’t censored too much, so I can give it 3.5 pools of blood!