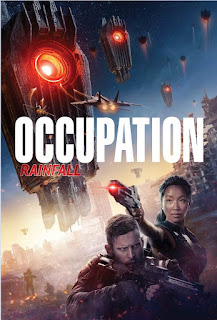 Two years after aliens land on Earth, survivors from Sydney, Australia, fight in a desperate war as the number of casualties continue to grow.

“Occupation: Rainfall” sounds like a military operation, and that’s certainly what’s to come here. This movie is a sequel to “Occupation,” and picks up a couple of years after the events in that movie. Aliens have invaded, and now are really taking it to the humans. Even with some friendly alien help, things don’t go well from the start. Matt (Dan Ewing) and some of his team barely make it out of their latest mission. They still have their lives, and some important information that sets the stage for what’s to come.

Running out of options, the humans decide to act on this new information. They send Matt and Garry (Lawrence Makoare), who is one of the good aliens, on a mission to find a device that could save them all. Matt doesn’t trust aliens and that goes for Garry as well no matter who tells him differently. With such an important mission at hand, their bickering is just one of the many obstacles they face. The rest of the group has their own in-fighting to do mostly at the hands of Wing Commander Hayes (Daniel Gillies). Can everyone put their differences aside in time to save what’s left of humanity? 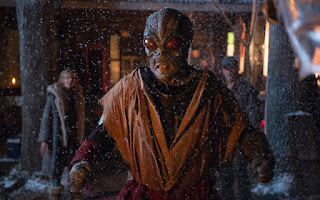 Having not seen the first movie there was a lot of uncertainty with what to expect here. It did take a little time to get the players right, but the story boils down to aliens vs humans again. And with aliens vs humans the audience can expect some action, and they will get a lot of it. As the action unfolds, the audience should appreciate the special effects that bring these battles to life. On top of the great action, the alien designs are solid, especially a pair of creatures similar to dogs.

When the action isn’t dominating the screen there’s a lot of back and forth between Matt and Garry. Matt’s history with aliens makes it hard for him to trust Garry no matter what happens, or who sticks up for the alien. Of course there will be a make or break moment, or two when their lives will depend on the other. While there’s that relationship, there’s another odd one revealed later on between Bud (Ken Jeong) and another alien Steve (Jason Isaacs). They seem to be their only to prove humans and aliens can get along in a strange way, and maybe for some comic relief.

As with many great space adventures, this doesn’t seem to be the end of this war. “Occupation: Rainfall” looks like it will be a sequel in the next attempted blockbuster alien vs human trilogy. With great action scenes and solid special effects, it’s certainly on the way. Matt and Garry are a good start for characters, but maybe they need to add someone with a little more spark, and who will be a little more memorable to finish it off. Regardless, I hope to catch the first movie and would definitely watch a third one, so I give this movie 3 pools of blood.

In Theaters, On Digital and On Demand June 11