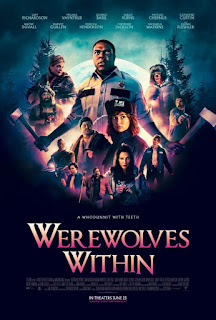 After a proposed pipeline creates divisions within the small town of Beaverfield, and a snowstorm traps its residents together inside the local inn, newly arrived forest ranger Finn and postal worker Cecily must try to keep the peace and uncover the truth behind a mysterious creature that has begun terrorizing the community.

This community is definitely about to channel the “Werewolves Within” themselves. The story picks up with forest ranger Finn (Sam Richardson) arriving in the small community of Beaverfield. A small town where everyone knows each other, and have now become divided over a proposed pipeline that would cut right through the town. Finn seems to have found a nice place to stay, and the even nicer mailwoman, Cecily (Milana Vayntrub). She helps him around town, and the pair bond rather quickly.

However, Finn is soon tasked with trying to hold the town together, as small problems get bigger and bigger. He has to deal with the town outcast, Emerson (Glenn Fleshler), who can be plenty intimidating. From there he gets complaints of missing animals, and then a dead body. The fun really begins when Dr. Ellis (Rebecca Henderson) hints at a werewolf being on the prowl, and everyone gets snowed in together. Can Finn solve this mystery before this community becomes an afterthought? 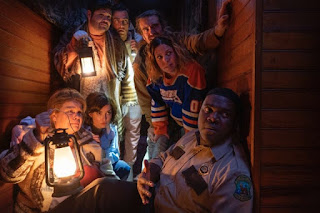 Of course horror fans will be flocking to this movie to see the werewolves, but they’ll have to exercise great patience before seeing any kind of transformation. In some cases, that might be a reason to complain but definitely not here. First off, Finn and Cecily prove to be two characters who the audience won’t be able to get enough of. There’s a good comedic flow between the two that’s never over the top, and should at least keep a smile on the audiences’ faces. Both are similarly nice and aim to please, but Cecily seems to have a little more edge to her.

The rest of the community is a joy to watch as well. Some of them will be easy to like, and others not so much. Of course the more they hate each other the better the comedy and action becomes. Before the audience knows it, they will turn on each other whenever the opportunity rises. One by one will fall until the mystery is solved, and the audience gets the wolf everyone has been waiting for. 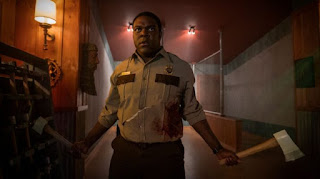 As the community gets thinned out, the audience will finally experience some horror. Not the wolf tearing into people kind of horror, but some blood will be spilled. Of course the big moment comes when the audience sees the wolf transformation. It’s not going to be a crazy one, but certainly fits with how the movie goes. It sets up for dramatic ending with some good twists and turns.

“Werewolves Within” is based on a game, but it never really seems like it. It starts off with a lot of comedy giving the actors and actresses a chance to shine. It also displays some great writing with the characters created, and the interactions between each other. The audience may or may not figure out who the wolf is early on, but it will be entertaining to go along with this murder mystery regardless. This might not be the bloodiest werewolf movie ever created, but it may be one of the most amusing ones. With that said, I give it 4 pools of blood.

In Theaters on June 25th & On Demand July 2nd