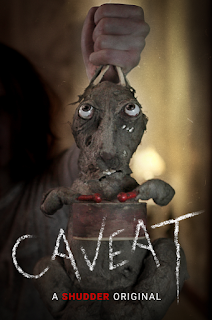 A lone drifter suffering from partial memory loss accepts a job to look after a psychologically troubled woman in an abandoned house on an isolated island.

Always make sure there isn’t a “Caveat” before taking a new job. Isaac (Jonathan French)  wasn’t expecting to receive a babysitting job. Alright, he doesn’t have to watch over a baby, but instead a young woman. Barret (Ben Caplan) offers him a decent pay to watch over his niece Olga (Leila Sykes) for a few days. Isaac isn’t sure about it, but he’s eventually talked into it.

Right off the bat Isaac finds the first of several caveats to his new job. Barret never mentioned that the house she lives in is on an island. He isn’t excited about that, or when he finds out that he won’t be allowed in Olga’s room. It’s not because he wants to be in her room, but because he’s forced to wear a harness that limits where he can go. Once locked in, Barret leaves the two to get acquainted, and the mystery of this situation unfolds.

As Isaac strolls around the house the mood is going to be set. It’s quiet with some tension in the air. The house is dark and gloomy with areas that are hard to get to for good reason. The pace of the film is also set here before Isaac and Olga have their first encounter. While it’s more about this atmosphere and pace that’s created there’s still a few good scares mixed in, especially at the ears of a creepy old toy rabbit.

With the stage set everything gets more interesting when details about the two are slowly revealed. Olga has some mental issues and uses a crossbow for her protection. She's alone because her father is dead, and mother has gone missing. Clues to what happened to them are somewhere in the house. Isaac is also looking for clues about his past, as he has recently suffered some memory loss of his own. The longer the two stay in the house the more their personal mysteries come to light. It will be strange at times, but certainly fits with the odd situation that’s created to begin with. 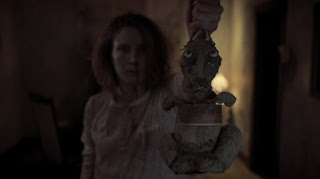 “Caveat” is quite a mysterious movie for many reasons. It all starts with the house, and the gloomy atmosphere that never seems to go away. The house has secrets, but so do its current occupants. The audience will never know what to expect from Olga because of her mental issues, and preference to stay locked in her room. Isaac is also somewhat unpredictable because of his memory loss, and especially when he becomes desperate to get off the island. It might be confusing at times, but this cat and mouse game will be well worth it in the end. With that, I give it 3.5 pools of blood!