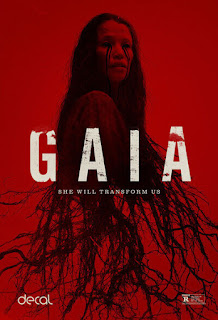 An injured forest ranger on a routine mission is saved by two off-the-grid survivalists. What is initially a welcome rescue grows more suspicious as the son and his renegade father reveal a cultish devotion to the forest.

There’s an interesting “Gaia” concept that envisages the Earth as a super-organism that operates to regulate its own environment, principally temperature, to keep it habitable for the biosphere. Unfortunately two forest rangers are about to enter a world where something like that might be happening. Gabi (Monique Rockman) and Winston (Anthony Oseyemi) are going down a river, and observing the nature around them. Gabi is also flying a drone over head of them until it crashes. Against Winston’s advice, she insists that he stop the canoe so that she can go looking for it.

The search doesn’t go so well, as she stumbles into a trap set by some father and son survivalists. She finds herself stuck there, and gets a taste of some of the strangeness of the forest. Finally, father Barend (Carel Nel) and son Stefan (Alex van Dyk) rescue her. They certainly aren’t her knights in shining armor, but are the only ones that can help her heal and stay safe. Safe for the moment, as she’s about to see the forest from a much different view than the canoe or drone. 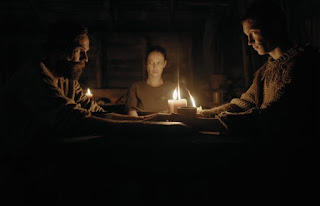 Obviously this screams eco-horror, and there’s going to be some strange things going on along side the horror. Gabi gets a small taste of it when injured in the forest, and forced to hear the sounds of the forest and plants unusually moving around. As one might expect, Barend and Stefan are odd as well, covered in dirt with minimal clothing on. That’s just the beginning of it for this pair, as they’ve developed an odd belief system during their time with nature. Gabi learns some of it while there, but also tries introducing the real world to Stefan. This doesn’t sit well with dad, and puts an end to all three ever living together as one happy family.

As for the horror, that comes big time in the form of some plant creatures. Yes, they have human form, but are covered in plants, mushrooms, and other vegetation. They put up a good fight, and if you’re found lost out there you might end up looking like one of them. They would definitely have anyone wanting to exit that forest immediately. Some of the other horror comes from the implosion of this new formed group of friends and family. 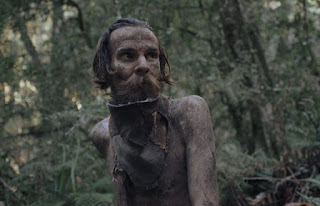 Overall, the creatures are awesome, and the audience will probably want more than they get from them. Instead, “Gaia” has a message about the environment, and uses the father and son to deliver it. In the middle of it all, the audience will also get to experience the weirdness of this forest. It’s great to look at visually, especially in some of the wild dream sequences. With that, I give it 3 pools of blood, and continue to say “don’t mess with the environment!”