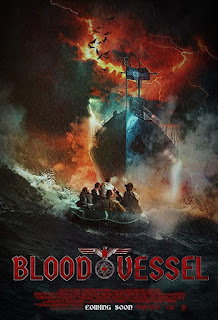 Somewhere in the North Atlantic, late 1945. A life raft adrift at sea, and in it, the survivors of a torpedoed hospital ship: with no food, water, or shelter, all seems lost until an abandoned German minesweeper drifts ominously towards them, giving them one last chance at survival.

Lost at sea you would look for a vessel to save you, but not a “Blood Vessel.” An interesting mix of characters has found themselves lost at sea after their ship was destroyed. It’s dark in unfriendly waters, and time seems to be running out for them. Just when they’re on the edge of giving up a mysterious ship comes into their view. They do all they can to get aboard the ship in hopes of rescue.

First they’re surprised by what they don’t find, and then by what finds them. It’s wartime so it’s possible to have an abandoned ship floating at sea, but still kind of suspicious. Once aboard, they find no welcoming party, and then search the ship for people and food. Just when it looks like no one is home a little girl (Ruby Hall) appears, but speaks no English. The survivors follow her lead to a room, where they actually find someone on the ship. Apparently he’s been hiding from something that now has its sights on the group. 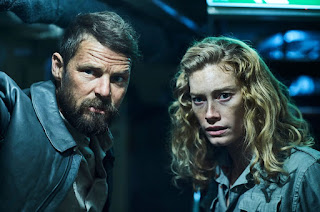 Going back in time is a good place to start. It’s fun seeing horror in another setting, and in another time. Not only does it go back in time, it hits the seas during wartime. All good things to kick things off with. Then there’s the mix of characters that’s presented. They come from different parts of the world, and in these times means that they aren’t necessarily going to get along. The turmoil between them drives much of the first half of the movie.

Once the girl appears it won’t take long for the audience to figure out what’s going on. The girl is waiting for her family to awaken…awaken because they’re vampires. Without a doubt, they’re are the best thing about the movie. These vampires keep some bat like features, and they look truly frightening. It’s awesome when they rise from the coffins, and there’s no turning back from there. They even have a trick or two to keep things interesting while they pick off this group. 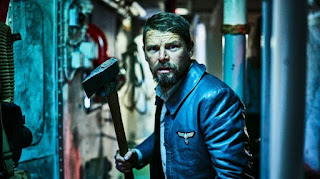 Being 1945, and lost at sea is a great place to start. “Blood Vessel” creates a dark and creepy atmosphere at sea, and doesn’t lose that once aboard the ship. The cast of characters here might get a little too much focus for about half the film, but it will be over for most of them soon enough. Some badass looking vampires make a great entrance, and then start their own war with these survivors. I like a lot of the elements that make up this movie with hopes that they just had got the vampires involved a little earlier. With that, I give it 3 pools of blood.

More info about this film at: http://promotehorror.com/2020/11/05/watch-blood-vessel-now-on-shudder/