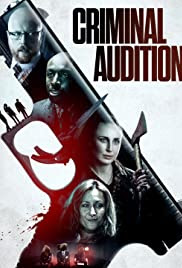 An ex-lawyer and his team run an underworld service, providing fake criminals to take on other people’s crimes. But a new dangerous client turns their world upside down as they face lies, deceit and murder over the course of one night.

Wouldn't it be nice if you could hold a “Criminal Audition,” and have someone commit crimes for you? Ryan (Luke Kaile) already committed a crime, did his time, and collected his paycheck. Now he’s basically the trainer for a new selection of criminals in the making. He works along side William (Rich Keeble) in staging crimes, and they’re looking for the next perfect criminal for a new client. L (Rebecca Calienda), J (Blain Neale), and P (Ben Scheck) are there for the criminal audition ‘of their lives.’

Actually it turns out to be more like ‘for their lives.’ The new client is Ms M (Noeleen Comiskey) and her associate Morris (Cameron Harris), who decide to hold the auditions their way. They start making examples of the three possible criminals, but not in the way Ryan and William expected. It seems like William is hiding something from Ryan, and so is Ms M and her friend. Will there be a winner of the audition, or even anyone still alive by the end of the night?

As things set up here, the audience might have to have some patience. They’ll get clued in on who Ryan is, and a little about what he did. It sets up for what they expect for the three new criminals who are there for the audition. There’s some slight humor, but it might feel like a little bit of a slow burn early on.

However Ms M, and her friend definitely turn things around. Ms M doesn’t act like a new client, but more like the new boss. If anyone doubts that Morris will be more than happy to change their minds. Horror makes an appearance on stage as the three wanna-be criminals start to be disposed of. There’s nothing nice about it, but also not too shocking who survives the longest.

The horror is good, but the best thing about this story is the mystery. Ryan is sure that something is up with William, and there probably is. After all, he’s the one who got Ryan started, and set this audition up. Is there something special with the three that want to be criminals? And what’s the deal with Ms M and Morris killing everyone, and the audition? The mystery and questions actually lead to a pretty interesting ending.

Overall, this audition gets off to a little bit of a slow start. Once the audience gets familiar with what’s going on things will finally get moving. Maybe because they bring the horror to the movie, but Noelene and Cameron certainly stand out. It’s easy to like the bad guys as usual. Full appreciation for what’s happened here will come once all the twists and turns have played out. With that, I give “Criminal Audition” 2.5 pools of blood.

More info about this film at: http://promotehorror.com/2020/11/04/criminal-audition-now-available-in-the-uk/