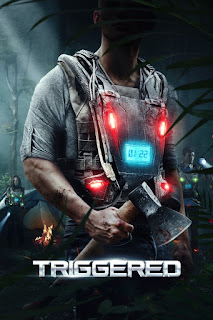 Nine friends, all harboring a dark secret, go camping in the woods. After a wild night of partying, they wake up with SUICIDE BOMBS strapped to their chests, all with varying times on their countdown clocks. They decide to work out how to disarm the bombs or find help – until they discover they can ‘take’ one another’s time by killing each other.

“Triggered” sounds like a cool name for a new game show, but this is not a game anyone wants to play. The film opens in the woods where a group of friends are using a camping trip to get reacquainted with each other. It doesn’t take long to figure out that some of these friends are closer to some than others. Some of them are couples which also opens the door for jealousy, and betrayal. While these might be common problems for some groups of friends, they’re about to encounter a much more deadly problem.

What the group doesn’t know is that Peterson (Sean Cameron Michael) is about to make a visit to their camp, and not with good intentions. The bunch of friends apparently partied too hard, and wake up dazed, confused, and strapped with devices around their chests. Peterson explains to them that they won’t be able to get the vests off, and hints at their friendships facing the ultimate test. It all becomes really real when one of their timers hits zero, and the device explodes. They will all explode except for the one who figures out this game of survival.

Friendships can be tested by many things, and this movie is all about testing friendships and maybe even love. Soon enough the group figures out that when one person dies, another person gains time on their timers to live. In other words, the more they kill, the better their chance of survival. Some members of the group aren’t so quick to want to kill their friends, but a couple of others don’t mind. It’s those that are open to the killing that make this a fun to watch.

Of course when the first bomb explodes the audience might think this is all they are going to get. Again, it’s the few that actually decide to fight to win the game, and for their survival that make this exciting. They turn on others, and the result is some good fight scenes, and deaths. One of the characters totally embraces the role, becomes a complete nut, and almost steals the show.

And in the middle of this all, there are some twists and turns in the overall story, and between certain individuals. As previously hinted at, there might have been some cheating going on between some people, so that plays a factor. To pull on heart strings, there might be a relationship heading in the opposite direction of those cheated on. Then there’s the reason Peterson did this to them in the first place. It has to do with his son, who is friends with the group. One of these friends did something to him to start this chain of events, and what might be most surprising is the reason why they did it.

“Triggered” starts off on the right foot by presenting a nice sized group of young people, and sticking them in the woods. Nothing good happens to young people in the woods including this group. When push comes to shove, friendships are tested, and few survive. That is, few friendships and people survive this trip. While not a slasher movie, it does become similar to one when friends begin to turn on each other. Some good deaths are created with some funny one liners, and a big mystery behind it all is eventually revealed. With that, I’ll pull the trigger on this review, and give the film 3.5 pools of blood.