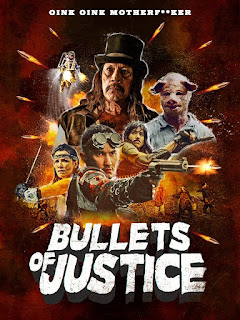 In the post-apocalyptic aftermath of World War 3, an army of half-human half-pig super-soldiers takes over the world. It is up to a group of human rebels to destroy them and liberate humankind.

“Bullets of Justice” sounds like a title of a very serious movie, but this might just be a movie unlike any other. The world is a very different place after World War 3. Humans are now the minority to a group of half-human half-pig soldiers. Rob Justice (Timur Turisbekov) and his right hand woman Raksha (Doroteya Toleva) are bounty hunters out for revenge on these pigs, and particularly one named Benedict Asshole.

Of course getting revenge isn’t easy. Rob is going to have to do battle with pigs, and face some twists and turns along the way. He also has some personal demons to fight along the way. All in hopes to putting an end to the one and only, yes one and only, Benedict Arsehole. 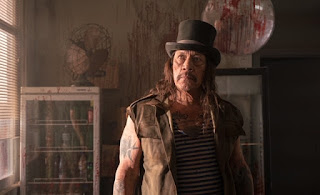 Besides the pig part this seems like a standard plot. However there’s a lot more going on. There are flashbacks that plague Rob like the one about growing up, and losing his father (Danny Trejo). Another more odd storyline is Rob losing a Mister Universe contest to this guy, and he seriously can’t get over it.

Rob is definitely a strange character, but there aren’t many normal people around. There’s something unusual about Raksha that makes it even weirder when they have sex. On a side note, there are a couple of sex scenes mixed all the madness, and not unexpectedly with this story incest. There’s a robot who’s actually pretty funny, and even the leader of the human revolution is far from the kind of leader one who expect. 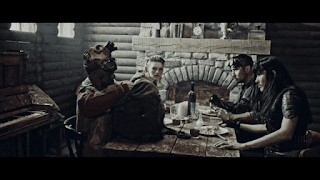 Hidden in the middle of this unusual story is some really good action scenes. The movie opens up with Rob and his partner taking out some of these pig soldiers. They’re then attacked by the pig version of Boba Fett. There’s another good fight scene in a home that includes a twist, some sex, and humorous moments. And then it all ends with some more good action, and a huge twist that no one could’ve seen coming.

“Bullets of Justice” is a lot of things including a movie that won’t be for everyone. On the surface it appears to be another action/horror movie. A hero with a sad background faced with taking down evil in the form of mutant pigs and that should be good enough. However, it then meets the calls of fans who want something different and it gives it to them. Unique characters, random sex scenes, unusual dialogue, and again nothing tops that out of nowhere ending. Throw in great action scenes, and it's all good enough to earn 2.5 pools of blood!