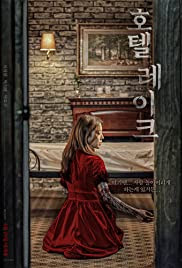 Seeking support as the guardian of her younger sister, Yoo-mi returns to a small hotel run by a family friend. As bizarre incidents creep up in her mother’s old room, Yoo-mi will have to unravel the supernatural mystery and discover the truth before it’s too late.

Directed and written by: Yoon Eun-kyoung

No more “Lingering” over this movie, it's time to get to this review. Yoo-mi (Lee Se-young) seems to be having a hard enough time taking care of herself, and now she’s being asked to take care of her little sister, Yoon Ji-yoo (Park ji-young). Yoon can’t seem to stay in the orphanages she’s sent to after their mom died, so they want Yoo-mi to take her. Since Yoo-mi doesn’t feel like taking on that responsibility she decides to take her sister to stay with one of their mom’s good friends. They call her “Auntie,” and she runs a hotel with a strange past that Yoo-mi is going to learn about.

Yoo-mi wants to drop off her sister and go, but she ends up staying longer than she wanted. Yoon didn’t want to stay either, but seems to have found an invisible friend. This is just the start of the odd things that Yoo-mi starts to notice. Before she knows it, she’s going to be unlocking secrets that include her family’s past. 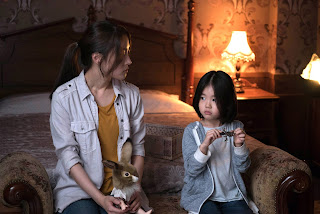 There’s no lingering to start this film, as a young girl is being chased in the woods, and it doesn’t end well. After the introduction to the two sisters, they find themselves driving to the hotel, and Yoo-mi sees something absolutely crazy in her mirror. It’s a moment that might be equally as shocking as a similar car scene in “Hereditary.” That isn’t all the scares, as there’s several more to come in the hotel that’s largely empty.

While there’s no lingering with the scares, there might have been a little too much lingering in between them. In the beginning half, there’s a lot of focus on the sisters relationship and getting Yoon settled in. That’s expected and fine, but it seems like maybe they spend a little too much time on it. Then in the second half, the story turns to more about their mother, and this woman that’s haunting them. Again the haunting is fine, but Yoo-mi’s investigation into what’s happening slows things down too much. 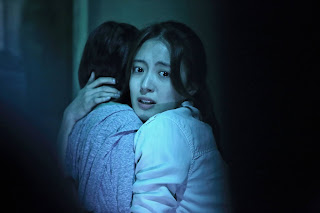 The strong point for “Lingering” is definitely the scares. It starts off well especially with what happens in the car, and continues to spread out the scares along the way. However, the scares might be spread out a little too much leaving the audience watching a lot of talking. Maybe if they simply got rid of the police involvement it could have moved fast enough. However, don’t linger on whether to watch this or not because it’s certainly worth it for the scares. With that, I give it 3 pools of blood.

More info about this film at:http://promotehorror.com/2020/11/12/lingering-watch-it-today-on-shudder/