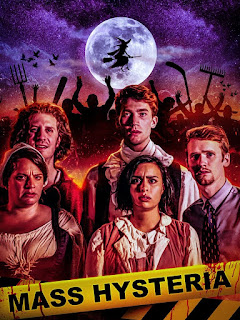 A group of salem witch trial reenacts find themselves at the center of a modern day witch hunt.

This isn’t the first or last time witches have caused “Mass Hysteria.” Paige (Geena Santiago) is ready to move on from her job as an actress in Salem. She’s played a witch in the reenactment of the Salem Witch Trials for awhile now, and she’s looking at getting a real acting job in New York. Halloween has come, and it’s her last performance. Of course her fellow performers are sad to see her go, but it’s going to be a night to remember.

Their audience is primarily tourists, and they’ve come to enjoy the show. What they don’t know is that one of them is going to die. During the show, Paige delivers her usual curse, but this time the curse actually works. One of the audience members starts choking, and then dies. This causes a disagreement between the cast and the tourists, and Paige apparently curses them again. When another person dies the tourists decide the witch must go, and all out chaos ensues. 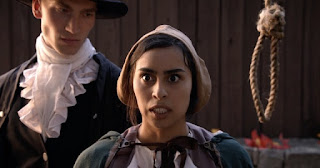 Right off the bat the audience is going to know this is going to be a funny movie. Paige is walking through town excited to be leaving, and all kinds of hilarious things are happening in the background. Some of them are superstitions being broken, while others are people just being plain stupid. Actually, there aren’t too many really smart people around, which is why this situation goes from bad to worse real quick.

The tourists are definitely all kinds of dumb, and they aren’t helped when they start following a priest who fuels their desire for revenge against the witch. The action leaves the theater, as the tourists chase the cast all around town. From what started as a play becomes a real life witch hunt. As the cast continues to play hide and seek with the tourists, they also try to figure out why people keep dying. 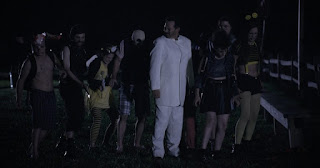 Overall, "Mass Hysteria" will probably keep a smile on your face through most of it, and then squeeze in a few moments where you might fall out of your seat. The storyline is actually pretty creative in turning a theater show about witch trials into a real life one. Fortunately for Paige and her fellow actors the tourists hunting them down aren’t rocket scientists. They put on a nice game of cat and mouse in the streets of Salem before figuring out why everyone started dying. It all comes together with some good performances by everyone involved. No need to put me on trial, as I give this movie 3 pools of blood.