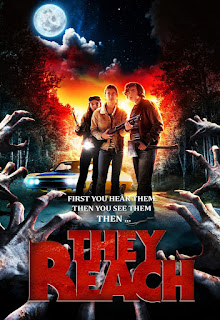 In 1979, a young girl stumbles upon a possessed tape player. She unknowingly unleashes a demonic entity that haunts her family while slowly dragging the small town of Clarkson to Hell.

“They Reach” reaches back a few decades to bring fans another movie similar to “Stranger Things,” “Goonies,” and “Summer of ’84.” This one opens in 1969 with a father and son tandem trying to help a save a possessed child. While the father works to save the child, his son is tasked with recording it. In the end, they don’t save the child, and the recorder basically becomes garage sale material.

Now ten years later, a young teen girl named Jessica (Mary Madaline Roe) finds the recorder in a store, and brings it home. She puts it in a mix of stuff she’s using for a science project. While working she accidentally cuts herself, and blood ends up on the recorder. Now that the recorder has had a taste of blood, the evil that hides in it is unleashed on all those who crosses its path. 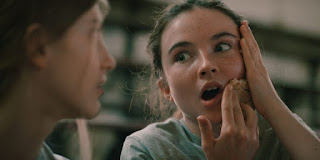 Obviously the first place to start with this movie is the young cast. Mary gives a strong performance as the lead. Her character has a lot to overcome, not just the evil, but also the loss of a sibling. Jessica has help from her two best friends, Sam (Morgan Chandler) and Cheddar (Eden Campbell). Being partly a coming of age story, Sam is coming of age as far as his feelings for a girl, and the audience will see him do whatever he can for Jessica. And then there is Cheddar, who from a comedic standpoint steals the show.

With young characters there might be the expectation of a more teen friendly story, and it does have some of those elements. However, for those looking for blood to be spilt there’s plenty of it. The evil has no problems doing its worst to the people in this town. Faces are pulled off, heads are lost, and the blood is all over the place. It all leads to an ending that has a choice to be more like the typical teen ending, or follow the brutality that has been shown. No spoilers, you’ll have to watch to see how this story ends. 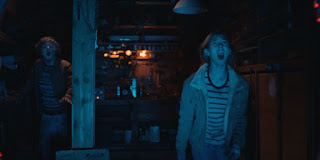 At first glance “They Reach” might seem familiar. Young teens being teens until they encounter something sinister. When the evil is unleashed there’s nothing teen friendly about it. Horror fans will be pleased with the surprising amount of blood spilled here. There’s a good story set up, and another strong cast of young actors. With that, I give it 3 pools of blood.

More info about this film at: http://promotehorror.com/2020/10/15/official-trailer-and-poster-for-they-reach/