THE NIGHTS BEFORE CHRISTMAS REVIEW 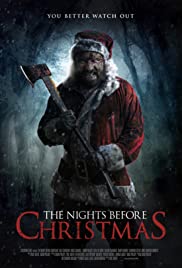 A murderous Santa and Mrs. Claus play a cat and mouse game with the FBI.

Some people get unwelcome guests on “The Nights Before Christmas,” but who would have thought Santa and Mrs. Claus would be some of them. Courtney (Keegan Chambers) has been traumatized by the events of last year, and is now hiding in a new town. She’s been away from family and friends all this time until her dad shows up trying to get her to come home. He means well, but his visit to her changes everything. On the way home, Santa (Simon Phillips) makes a surprise appearance that causes her father to run off the road, and later die.

This is just step one in Santa and Mrs. Claus (Sayla de Goede) plan to back at all the people on his Naughty List. They set several traps getting back at certain people while the FBI tries to close in on them. Agent Natalie Parker (Kate Schroder) is the one tasked with bringing them in, and it becomes no easy job for them. Plenty of people die before Santa comes face-to-face with his ultimate targets.

Firstly, I didn’t see the original movie that this film follows so some of the story seemed off. There are some flashbacks early on that fills in some of the blanks, but it felt like maybe there was somethings later on that I needed to know more about. Besides the backstory, the rest of the story was straight forward. Two mad people have escaped an asylum, and are now out for revenge.

The important thing to remember about many of these Christmas themed horror movies is to not take them too seriously. Don’t get too wrapped up in the story, and instead enjoy the chaos that’s created. Santa certainly does that here, as he slashes his way through many victims. There’s plenty of victims, and the blood and guts are flowing like the egg nog. If the audience hates CEO’s and board rooms, they might get a kick out of a particular scene. The best part of it all might just be how much fun Santa has while doing it. Simon does a great job of making this character a complete nut job.

So with the holidays on the way, if you’re looking for some holiday horror this might be one for your list. Unlike me, maybe you should check out the first movie to get the complete picture here. If not, have no worries just enjoy Santa go wild. Mrs. Claus is alright, but she might remind audiences of another popular character too much. On the other hand there might be a third part so why not get in now! With that, I give it 2.5 pools of blood.