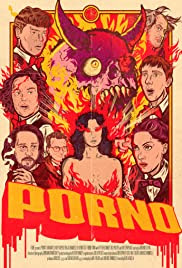 When five teen employees at the local movie theater in a small Christian town discover a mysterious old film hidden in its basement, they unleash an alluring succubus who gives them a sex education…written in blood.

“Porno”…alright start with getting all the jokes, and inappropriate thoughts out of your head. Now we can talk about this film that takes place in a theater. Mr. Pike (Bill Phillips) runs the theater, and tries to do so by including a little religious teachings to his mostly teenage staff. He leaves Chaz (Jillian Mueller) in charge for a few hours while the group gets to hold their private movie night. However, it isn’t so private when an apparently homeless man (Peter Reznikoff) runs wild in the theater.

Before they get rid of the man, he has opened a mysterious doorway in a wall. The group can’t help but find out what’s hiding back there. A pleasant surprise is waiting for the boys, as they find that they’ve unleashed a very beautiful and barely dressed woman (Katelyn Pearce). While they might have certain ideas about her, this woman has something far more evil in mind. She’s just one of several secrets this theater has been hiding. 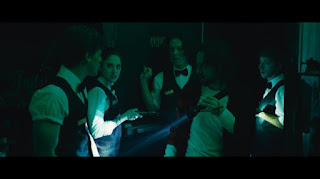 Besides the horror, the teens do their part at making this a fun film. Chaz has a crush on Ricky (Glenn Stott) that creates some awkwardness because he has a secret of his own. More entertaining might be the friendship between Abe (Evan Daves) and Todd (Larry Saperstein). While they're supposed to be moral kids they find it hard to fight their teenage urges. Heavy Metal Jeff (Robbie Tann), who is past his teen years, knows all about urges and fighting them. He does his best to guide the teens, but the temptress isn’t going to make it easy. 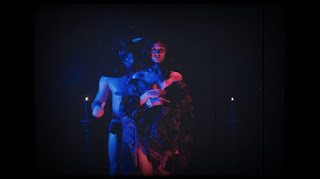 More info about this film at: http://promotehorror.com/2020/11/24/porno-now-playing-on-shudder/