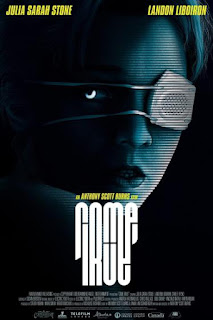 A teenage runaway takes part in a sleep study that becomes a nightmarish descent into the depths of her mind and a frightening examination of the power of dreams.

It would be nice if some dreams would “Come True,” but not necessarily all of them. Something has been bothering Sarah (Julia Sarah Stone) so much that she can no longer live at home. When her mom leaves the house she goes inside for a shower and food. Going to school doesn’t help solve her problem either, which is a continuing battle with sleep paralysis. She seems to just want the life of the average teen, and hopes she has found the answer to her problems.

One night she goes to get screened for a sleep study. After a series of tests it looks like she has passed, and will get to come back. Being an experiment, they don’t give her many details despite her curiosity. Soon enough she notices one of the people in charge, Jeremy (Landon Liboiron) has taken an interest in her. As issues come up with the study, she uses that to her advantage to get information from him. By the time they both realize something might be wrong here, it’s too late to turn back. 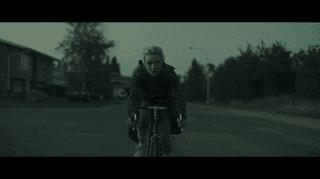 While strange at times, this story will give the audience enough to continue to want to know what’s coming next. Mostly because of the dreams and the shadow figure that continues to appear. It seems like it’s used almost as a way to scare the audience early on, but plays a much bigger role as both the scientists and audience see more dream sequences. The sequences are definitely creepy with this figure in it, and they make it even creepier as it appears in more than just Sarah’s dreams.

The dreams work well with the imagery and atmosphere that’s created, and maintained throughout. The film also goes at its own pace, which definitely works well with how the shadow figure is revealed more and more. The pace is also very apparent in the final act, and Sarah takes Jeremy, and the audience on a very long walk. A walk that builds tension and suspense, and leads to more strangeness. 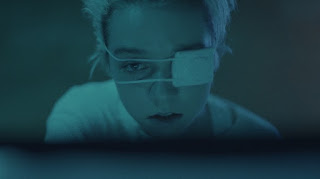 Julia does a great job of playing the young woman struggling to get over her sleep paralysis. It will be easy for the audience to want to see Sarah overcome her issue. There is no doubt the film is done extremely well, and done with its own style. It seems like a straight forward story on the surface, but is also strange at times. It certainly ends in an extremely odd way that I never saw coming. With that said, I give “Come True” 3 pools of blood, and wish everyone sweet dreams!