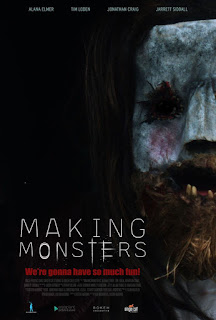 A social media prankster and his fiancee find their idyllic country weekend turn into the ultimate video prank where the stakes are like and death.

Seems like the world is continuously “Making Monsters” and that certainly is the case here. Chris (Tim Loden) has become famous on YouTube for his pranks. What kind of pranks…well any way in which he can scare the hell out of his girlfriend Allison (Alana Elmer). Apparently he’s made it go a long way, and has even given talks about his success scaring her to death. The pranks are fun, but now Allison wants to have a baby. This means Chris can no longer prank her, as she needs to be as stress free as possible.

What better way to be stress free than to take a trip? The couple runs into one of Chris’s old friends, who invites them to visit him and his fiancee David (Jonathan Craig) at their new home. They apparently just bought an old church and made it their home in the middle of nowhere. The couple arrives there before their friend, and are greeted by David. The three get acquainted, and have a night of partying before things go wrong. 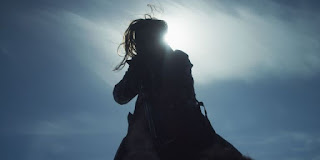 As the audience might expect, the prankster is about to be pranked... or is he? An interesting concept the film presents, as the couple finds that they have been left alone up there for days before waking to no phones or cars to help escape. When talking about Allison during one of his talks, Chris mentions Allison having a strong connection to the supernatural. This didn’t seem important at first, but then a supernatural presence makes itself known to her when they are left stranded. Again, the audience is left wondering is it there to help, or hurt her.

Soon enough the audience and the couple will find out what’s going on here. There’s definitely a monster here, and the audience gets to see them right at the opening. There’s a brutal opening scene, and that brutality continues with the couple. The monster isn’t messing around, and the audience will feel the force of every blow that’s taken. It’s so satisfying that it’s a shame the kill count isn’t a little higher. 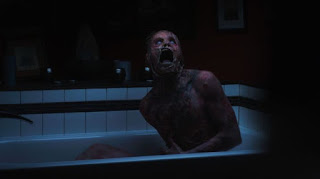 There’s no doubt that “Making Monsters” will give the audience a lot to like. It opens with with a savage scene, and follows that up with a great prank. It then slows down to present a couple that’s actually worth caring for, and sends them off to an unusual location. There’s still some fun moments before monster madness takes over. The audience will learn that Alana probably got the part because she’s a fantastic screamer, and is given a great creepy looking supernatural being to scream at. They will also learn that this monster is cold-blooded. However, it’s not perfect, as the supernatural angle probably needed to be a little clearer, and it definitely could have used some more of those glorious death scenes. With that, I give it 3.5 pools of blood.