STAY OUT OF THE ATTIC REVIEW 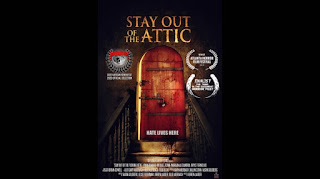 A diverse group of ex-cons-turned-movers are convinced by their creepy client, Vern Muller, to, pull an all-nighter for a generous pay bump. As the night progresses and rooms are cleared, they slowly uncover the horrors that exist inside his old Victorian mansion, including boobytraps, human experimentation, Nazi monsters and more. Will they survive the night?

Directed and written by: Jerren Lauder

“Stay Out of the Attic,” a good idea for anyone in a horror movie especially this bunch. Schillinger (Ryan Francis) is in charge of a very small moving crew that has just pulled up to their latest job. Imani (Morgan Alexandria) and Carlos (Bryce Fernelius) are the other workers, and apparently also ex-cons looking for a second chance. Schillinger is really looking to make up for some of the wrongs of his past and has not only employed the others, but takes the time to almost mentor them as they work.

Vern (Michael Flynn) has hired this crew, and offers them a big pay day if they can move everything out today. His biggest request is that they stay out of the attic. It’s a big task for just three people, but this group agrees that they can’t afford to pass up this pay day. Everything seems alright until Carlos starts looking through stuff he probably shouldn’t have. Just as he alerts Schillinger and they agree that maybe they should go, Imani goes missing and the secrets of this house are unleashed.

The interesting thing here is the cast of characters that the audience is supposed to like. Can the audience root for some ex-cons looking for a second chance? It’s possible, but it’s also possible that they will only care to a point. What makes them kind of likable is how well they interact with each other, and maybe even some of their plans for the money. And then there’s Schillinger who has something else in his past that’s not going to make it easy for some to get past.

And why is it important whether the audience likes them or not? Well, this house is definitively full of horror mostly because of Vern’s experiments. Trying not to spoil too much, but there are some mutants here that are going to go after the group. Vern also might be looking for a new creation as well. There’s going to be some crazy moments, and plenty of pain coming at the movers.

“Stay Out of the Attic” takes several risks. It starts with the cast of characters the audience is given. There’s a big risk if the audience will care about them or not. If not, the film could be lost early on. However, if the audience hangs on long enough there’s some good horror to come. Again, another risk is that the audience might feel this storyline feels familiar, but so does a lot of horror. With the direction it takes there’s usually a lot more hate involved, but this story never goes too far in that direction. It’s more about a certain character overcoming their past. Also, interestingly enough they even give the audience a mutant to root for on top of everything else. In the end, they do create some good tense moments, and some good action. With that, I give it 2.5 pools of blood, and am glad I don’t have to help anyone move.