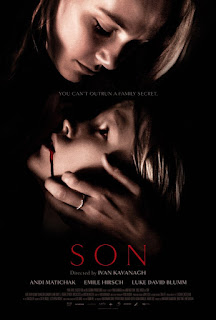 When a young boy contracts a mysterious illness, his mother must decide how far she will go to protect him from terrifying forces in her past.

Directed and written by: Ivan Kavanagh

Most parents would say their “Son” is special, and there is no exception to that here. Laura (Andi Matichak) escaped cult life, and has been raising her young son David (Luke David Blumm). Life started off rough for her and just when it seems like everything is going to work out her old life creeps back in. One night she hears some noises, goes to check on David, and is shocked to find him surrounded by a group of people.

While trying to figure out what happened that night, David surprisingly falls ill. Laura rushes him to the hospital for help, but after a series of tests the doctors aren’t sure what’s wrong with him. Suddenly he appears well enough to leave the hospital, and goes home only to find himself back there again. As David struggles with this mysterious illness, Laura starts letting the ghosts of her past get the better of her. She takes her son from the hospital and goes on the run with him, which turns out to be just what he needs.

The first thing to like about this film is how they apparently don’t care that Luke is a young actor, and they let him do some crazy things. He throws up blood, gets covered in blood, and yea does some crazy things to some people here. Besides all things blood, he does a terrific job handling everything else that’s asked of him. Andi also gives a strong performance nailing the struggle of this mother. Not only does she have to cover being worried for her character’s son, but also the struggles with the returning effects of being in the cult.

Besides the amazing performances, there are a lot of memorable scenes and images created here. The opening sets things up with Laura escaping the cult, and the scene in David’s bedroom is creepy. Trying to be spoiler free, lets again mention the audience won’t forget some of the things David does. There are plenty of tense moments, but one that stands out is definitely when Laura goes face-to-face with a pimp.

“Son” is another horror film that goes right at the heart of how far a parent will go for their children. Laura thinks she escaped cult life, but soon enough finds out it never left. It hits her mentally, and takes over David in even worse ways. While the story might feel familiar, it will definitely give the audience some lasting images. It builds great tension, and has enough shocking moments. It all comes together with strong performances with all those involved. With that, I give it 3.5 pools of blood.

Now On Demand and Digital