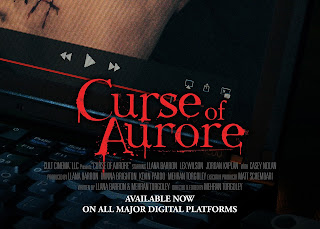 Another curse is upon us, and the “Curse of Aurore” probably isn’t going to end any better than the others. Casey Nolan starts off the movie by presenting a mysterious USB drive that he got for his YouTube Channel. With no clue what’s on it, he plugs it into the laptop, and the audience is dropped into a found footage film. This one follows three filmmakers, Lena (Llana Barron), Aaron (Lex Wilson), and Kevin (Jordan Kaplan), who have arrived in Quebec looking for ideas for a movie. Lena is familiar with the area, and they start to settle in at one of her relative’s homes.

She begins to pitch the idea for their film to be centered around a local legend of a girl named Aurore. She was a young girl who died tragically at the hands of her parents, and that event apparently has haunted this town ever since. The three investigate a church and cemetery where she was buried, along with a few other places. As they make their way around, they’re definitely not welcomed by most in town, and slowly strange things start happening. Before they know it, they go from planning a film to starring in one!

So obviously this is a found footage film after the first few minutes. With that usually comes a close watch at what the camera does, and how realistic the camera use seems to be. For the most part, they do a pretty good job of keeping it consistent, and within the story. There are times when they set it down, which are always appreciated because no one is going to film constantly especially when things go wrong. Of course they get in the big conclusion, and when one of the three insists that the camera is still rolling during a crazy event. There's some breaking up of the images from time to time hinting at something supernatural might be around.

Now this film isn’t built on trying to make the audience jump out of their seats. Instead, it relies on getting the audience to first like the three characters, and then stick with them through this investigation. The three characters are very likable, particularly after watching them smoke weed, and have fun exploring Lena’s relative’s home. Also, Kevin isn’t afraid to have a little fun, and take some risks at times to lighten the mood.

Investigating around town does get weird at times, but stays relatively grounded. At one time, their car gets stuck, and they go to a house for help. They meet some unusual people and get a little spooked, but nothing too dangerous happens. They also visit the home of Aurore, but meet some resistance from the person who lives there when they get a little too eager for the truth. All these moments eventually come together when the group reviews some footage, and notices some creepy things happening in the background. It’s a slow build, but it definitely will give the audience the kind of found footage ending they expect.

The “Curse of Aurore” isn’t built on a lot of scary moments with the camera shaking all over the place. It tries to be as realistic as possible, and takes it’s time building to the mysterious ending. It gives the audience three very likable characters by three actors who do such a good job getting along that they don’t even seem like they’re acting at times. Then when the moments right it lets the audience and characters know something has been following the group for awhile. Things start to add up, but this is a found footage film for a reason and there will be no happy ending. I definitely appreciate this more subtle attempt with found footage, and letting the audience wait to the final act for the curse to reveal itself. With that, I give it 3 pools of blood!