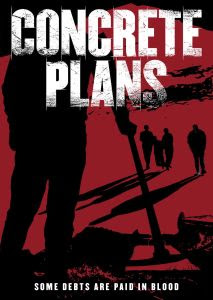 High in the remote Welsh mountains, five builders are brought together to renovate a sprawling old farmhouse. Housed in mouldy portacabins, tension soon simmer between the men and the self-entitled aristocratic homeowner, as well as amongst the rag tag group of men themselves.

Directed and written by: Will Jewell

It would be nice to think you have “Concrete Plans” but things often go wrong and plans change all the time. A group of workers have come to a home in the mountains to do some renovation work. They’re basically going to live up there while they complete this job, which doesn’t come too easy from a group of guys that don’t really know each other. Bob (Steve Speirs) is in charge of the workers, and he’s brought along his nephew Steve (Charley Palmer Rothwell). The other three are made up of Jim (Chris Reilly), who’s up to no good, an older worker Dave (William Thomas), and an immigrant Viktor (Gordan Bogdan). The group seems to fight amongst themselves just as much as doing the work they’re there to do.

Another person they don’t get along with is the owner of the property, Simon (Kevin Guthrie). Simon feels a need to make sure the workers know who is boss, and for them to stick to their work. He reminds them not to go near the main house, and that his girlfriend Amy (Amber Rose Revah) is off limits. Bob tries to ensure him that as long as they get paid everyone will do what they’re supposed to. While the audience sees some issues within the workers brewing, they also see what Simon is up to as well, and it’s not going to make this job go any smoother. 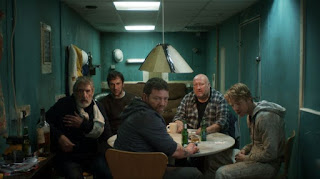 On the surface this might seem like a simple thriller of how things go wrong on a job, but there’s a lot of different things at work here. Some people say, “money is the root of all evil,” and that’s certainly at play here. Simon is having issues trying to hang on to the money that’s supposed to be his, and the workers are all in need of money for their own reasons. Things aren’t going to go well when Simon's intentions are found out by Jim, and Bob. The rich and the working class are about to square off, and the true horror of the film will show its face.

As hinted at above, the workers themselves don’t get along either, and the audience gets a look at how different workers get treated. Viktor is always assumed to be up to no good, and treated below the others. Dave’s old age is always brought up, and it seems obvious the only reason Steve got the job is because Bob is in charge. The most interesting opposites are Jim and Bob. Jim is clearly a bad guy, and Bob just wants to do the right thing, but struggles to because he’s in debt. When things go wrong everyone seems to show their true colors, especially in the film’s final moments. 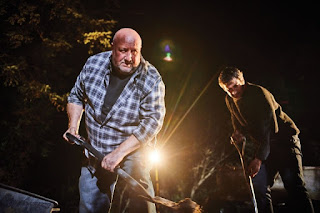 “Contrete Plans” sets two different classes of people together at the wrong time for many of them. Everyone thinks Simon is the rich guy with everything going for him, but he’s really barely hanging on to the money he does have. Most of the workers have nothing but a pay check to look forward to. When one side tries to screw the other out of what they deserve things get nasty real quick. While fighting over money, some won’t live long enough to spend it. And as the tension escalates, the film has one more twist in store proving someone did have a plan that maybe wasn’t concrete but solid enough. With that, I give it 3 pools of blood.