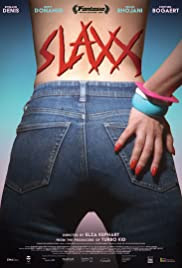 When a possessed pair of jeans begins to kill the staff of a trendy clothing store, it is up to Libby, an idealistic young salesclerk, to stop its bloody rampage.

“Slaxx” can often feel like they’re squeezing the life out of you, and this time they just might do it for real. Libby (Romane Denis) is the new hire at CCC, and couldn’t be happier to be there. CCC is the popular retail store whose goal is not only to sell great clothes, but also to “Make a better tomorrow today.” They try to be the perfect company from the start of making the clothes thru the sales process.

Libby is hired just in time for the release of their newest jeans, which promise the perfect fit. It’s the night before the big day, and the employees are all there getting the store ready for the release. The store manager Craig (Brett Donahue) is trying to keep the employees in line, and feeling the pressure of the moment. It doesn’t get any easier when employees start disappearing, and they fall behind schedule. On top of that they are about to come face-to-face with a killer pair of jeans!

Horror fans have seen killer tomatoes, cars, sofas, tires, piñatas, and now jeans! Yes, no matter how ridiculous some of those things seem filmmakers have found a way to make it happen. They make it happen in a fun way, as these jeans are out for blood. They squeeze the life out of some people, and find some other creative ways to spill as much blood as possible. At times the jeans might seem like a rabid dog, and other times like a pack of hungry zombies. And when not killing, they even find time for an awkward, but hilarious dance routine.

Watching jeans kill people is what the audience most likely came to see, but surprisingly they'll also get something a little more. The backstory to the jeans and why they’re in the store killing people contains a message about the people making the clothes. CCC portrayed themselves as being a company that did everything right, but that didn’t turn out to be the case. CCC put the company first, and now that decision will come back to haunt them. Libby and another employee Shruti (Sehar Bhojani) try to right the wrongs of the company, but will it be too late to save all the customers ready to storm the store? 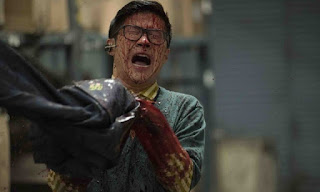 “Slaxx” uses killer jeans to take the audience behind the scenes of the whole retail experience. It gives the audience a different mix of characters, some into fashion themselves, and others who clearly aren’t. It shows how hard it can be to be the new hire, and the pressures of being the boss. The audience probably isn’t going to sad to see many of them go, and will enjoy watching them suffer as the denim squeezes the blood out of them. The audience will easily find themselves glued to every move of the jeans good or bad. And before they know it, a surprising message about the manufacturing part of the retail business will complete this puzzle. The reason behind the killer jeans is tragic, but then again so is what’s happening in real life. I’ve never been a fan of jeans, but am definitely a fan of “Slaxx.” With that, I give it 4 pools of blood, and glad to be a shorts and t-shirt kind of guy!